UK-based offshore wind developer SSE Renewables has informed that construction of Seagreen, the world’s deepest fixed bottom offshore wind farm,  which is also Scotland’s largest, has reached another milestone with the installation of a jacket in preparation for the project’s offshore substation topside which is due to be installed in early 2022.

Built by Petrofac and weighing in at 5,100 tonnes, the six-legged jacket was installed by Saipem 7000 semi-submersible crane vessel is now fixed to the seabed, at a water depth of around 55m.

The jacket has a seabed footprint of 43m x 43m and has built-in tubing designed to guide the incoming 15 inter-array cables bringing the electricity generated by the turbines to the substation. In addition, the jacket also has tubing to guide the outgoing three export cables from the offshore substation to the seabed.

John Hill, Seagreen Project Director said: “We are proud to be part of this important project for Scotland’s energy transition, as engineering, procurement, construction, and installation contractor. The installation of the Seagreen jacket was completed safely amidst Storm Arwen and Storm Barra, using several measures to minimize environmental impacts, such as low hammer energy and acoustic deterrent devices. We will continue to work closely with our partners to prepare for the safe and successful installation of the 4,800 tonne topside in early 2022.”

Situated around 27km off the Angus coast, the £3bn wind farm is a joint venture between SSE Renewables (49%) and TotalEnergies (51%).

SSE Renewables is leading the development and construction of the Seagreen project and will operate Seagreen on completion for its expected 25-year lifetime.

First power is expected by early next year with the offshore wind farm expected to enter commercial operation in 2023. 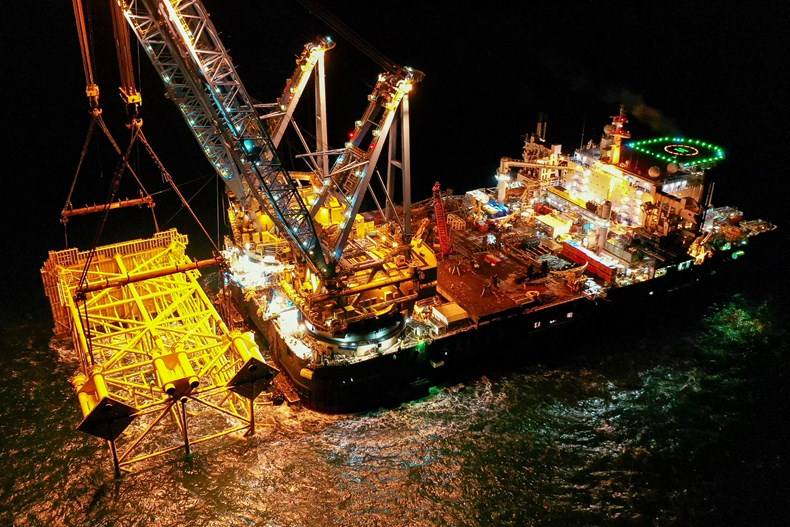