A Record 45 Ultra-large Containerships Were Ordered in March

The number of 15,000+ TEU ultra-large containership (ULCS) ordered reached record heights in March, reflecting the confidence of shipowners and investors amid continued strong demand in the container shipping sector.

According to shipping organization BIMCO, the record-breaking 45 ULCSs and 27 additional “smaller” box ships ordered last month bring the total order capacity to 866,060 TEU, marking a turnaround for the sector after record low order levels at certain points of 2020.

Total container shipping capacity ordered in the first quarter of 2021 has already reached 1,398,000 TEU, a six-year-high compared to previous full years, and up from 995,000 TEU ordered for all of 2020, BIMCO said.

“The industry is keen on benefitting from the economies of scale that ultra-large containerships have to offer if you carry payloads close to its cargo carrying capacity,” said Peter Sand, BIMCO’s chief shipping analyst. 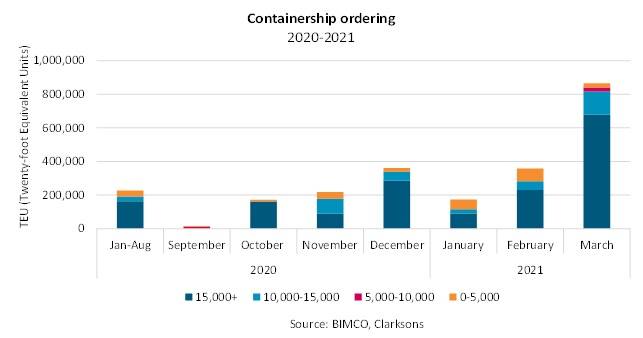 “The mammoth size of some containerships was questioned many times during the recent six days of Suez Canal blockage, as some saw it as an omen of ships becoming too large, compromising supply chain reliability, navigational excellence and safety,” Sand said.

“But as I said at the time, you should not expect much change on that account, as ultra-large containerships are the preferred choice of ‘weapon’ in the arms race of the container shipping industry seeking to improve long-term profitability,” Sand added.