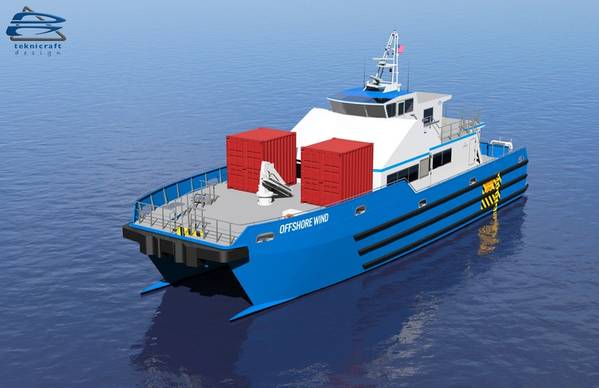 The Jones-Act-compliant vessel design concept is geared for the fast-expanding U.S. offshore wind market, based on the MO1, a proven vessel from Teknicraft Design, built in 2013 to support the North Sea offshore wind market. AAM, which is the exclusive builder for Teknicraft Design in North America, said the new concept design incorporates substantial updates and modifications, with the hybrid power system among its most noteworthy.

As an independent assessment of a concept within an agreed framework, an AIP confirms that the design is feasible, and no significant obstacles exist to prevent the concept from being realized.

The quad engine design concept has a beam of 33.5 feet with a projected speed of 29 knots, fully laden. This concept will incorporate Hamilton Jet’s parallel hybrid EHX system using Hamilton HTX waterjets, powered by quad MAN2862 LE 438 Tier 4 engines. The EHX system will allow for zero-emissions operations when using battery power and will enable both station keeping and slow speed operations, as well as boost power when needed.