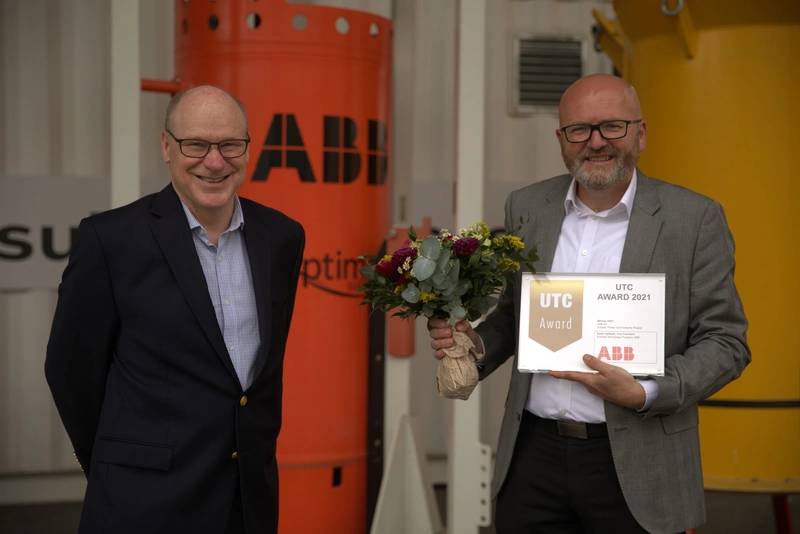 ABB’s subsea power system, capable of distributing up to 100 MW of electricity over long distances and in ultra-deepwater, has won this year’s Underwater Technology Conference (UTC) Award.

ABB’s US$100 million Subsea Power Joint Industry Project (JIP) involved the development of subsea power and conversion technology able to work in down to 3,000 m water depth and over distances of up to 600 km.

The project, which was supported by operators Chevron, Equinor, and Total, and Chevron, was one of the industry’s largest JIPs and, at peak, involved more than 200 scientists, engineers, and specialists from ABB.

Following the completion of the JIP in 2020, the VSDs [variable speed drives] have undergone the world’s first full-scale string testing with a OneSubsea multiphase compressor WGC6000.

The UTC Award, which recognizes, celebrates, and showcases outstanding achievements within the global subsea industry, was presented Thursday, during this year’s UTC event, to Svein Vatland, Vice President Subsea Technology Program, at ABB, who represented the ABB team that delivered the Subsea Power JIP.

Svein Vatland said: “ABB together with our partners Equinor, Total, and Chevron, are very pleased to receive this recognition for our innovative subsea power solution. The cutting-edge technology we have developed will be a key enabler for more sustainable oil and gas production and supports the ongoing energy transition. The Subsea Power JIP project is a clear evidence that cross-company collaboration, bringing our experts together, creates a strong creative and innovative environment making the impossible possible.”

Marie Bueie Holstad, chair of the Underwater Technology Foundation (UTF), an independent entity aspiring to provide more insight into the subsea industry co-organizer of UTC, said: “The development of a subsea power distribution and conversion system capable of supplying power over long distances, and to deep waters, is an important enabler for low-carbon oil and gas production. We congratulate ABB who with the support from their JIP partners have made an important contribution to the subsea industry.”

Since its foundation by the UTF in 1980, the UTC  subsea conference has been a forum for looking to the future of subsea technologies and systems.

Today, the UTC event is co-organized by UTF and GCE Ocean Technology, with organizing partners the Society of Petroleum Engineers (SPE) and the Forening for fjernstyrt undervannsteknologi (Association for Remote-Controlled Underwater Technology) (FFU).