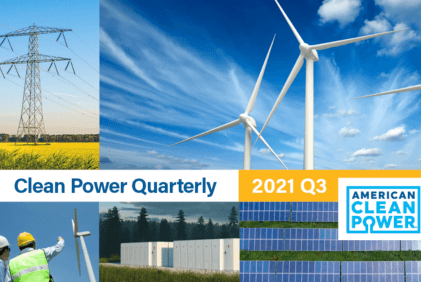 Solar represents the largest share of capacity in the clean power pipeline, accounting for 54%, followed by land-based wind at 23%, offshore wind at 13%, and battery storage at 9%.

Demand for clean power continues to rise, with power purchasers and project developers announcing 9,054 MW of new power purchase agreements (PPAs) in the third quarter. Overall, a total of 17,442 MW of PPAs have been announced in 2021, representing a 16% increase compared to the same period in 2020.

“Clean power is affordable, and the market is responding,” says Heather Zichal, ACP’s CEO. “Our report shows customer demand remains high and growing for clean power. Our industry not only provides good-paying jobs but also is a key part of solving the climate crisis. We are seeing a clean energy future develop here in the United States. Multiple technologies working together promise to provide more efficient, cleaner and more reliable energy for all Americans.”

Moreover, more than 415,000 Americans already work in clean energy across all 50 states, and that number is set to grow substantially over the next decade.

Texas also has the largest clean power pipeline, hosting 17% of projects under construction or in advanced development, followed by offshore wind projects in federal waters at 13%, California at 11%, Indiana at 5%, New Mexico at 4% and New York at 3%.

The number of clean power projects under construction and under development continues to grow significantly. At the end of September, the near-term development pipeline consisted of over 900 projects totaling 109,596 MW of capacity, including 38,122 MW under construction and 71,474 MW in advanced development. This is 28% higher than the first quarter of 2021 and 7% higher than the second quarter.

There is now 186,674 MW of operating clean power capacity in the United States, enough to power the equivalent of 52 million American homes.