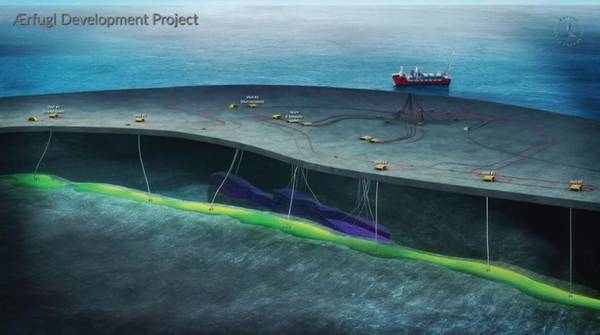 Norwegian oil company Aker BP is ready to start production from the first phase of its Ærfugl gas and condensate field in the Norwegian Sea, the Norwegian Petroleum Directorate said Friday.

Ærfugl will be developed in two phases, both with three wells, all of which will be tied into Skarv FPSO for processing and further transport.

“Production is also taking place from an earlier test production well in Phase 1 and an accelerated well in Phase 2, which was drilled from an available well slot on one of Skarv’s subsea templates,” NPD said.

All production on Ærfugl will be tied into Skarv, situated 210 kilometers west of Sandnessjøen in Nordland county. Aker BP and the other licensees plan to complete the Ærfugl development with the remaining two wells in Phase two.

Ærfugl was proven in 2000. The plan for development and operation (PDO) for the development was approved in April 2018.

The export of gas from Skarv will be postponed to obtain capacity for the Ærfugl gas on Skarv FPSO. This will contribute to improved oil recovery on Skarv.

Niels Erik Hald, the NPD’s assistant director for development and operations, says “it’s positive that production from Ærfugl Phase 1 will start as planned.”

Earlier this year, the Ærfugl project was one of the most profitable development projects on the Norwegian shelf with a break-even price of around USD 15 per barrel (converted from gas).