After a string of offshore oil discoveries in Suriname’s Block 58 in the past year, U.S. oil firm Apache is lining up another exploration well and is set to award two rig deals for the 2021 drilling program.

To remind, the company, with its partner Total, in July made a large oil discovery offshore Suriname, at the Kwaskwasi-1 well in Block 58, in which the two firms own a 50 percent stake each. The well was drilled by the Noble Sam Croft drillship.

The Kwaskwasi discovery was the third discovery in the block, after Sapakara West, and Maka Central discoveries. After the completion of drilling at Kwaskwasi-1, the Noble Sam Croft drillship moved the fourth prospect in Block 58, Keskesi, which is located approximately 14 kilometers southeast of Sapakara West-1.

Apache in July said it had identified at least seven distinct play types and more than 50 prospects within the thermally mature play fairway in Block 58. 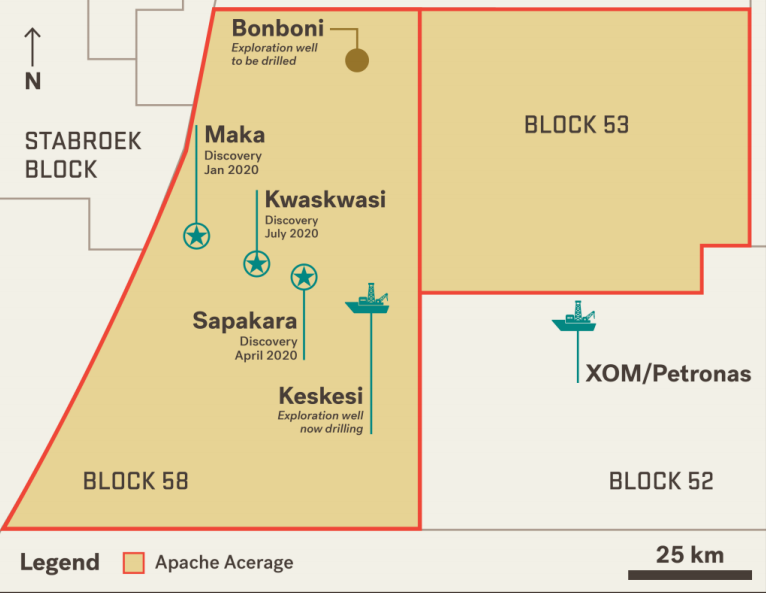 In its quarterly presentation on Thursday, Apache shared further exploration drilling and appraisal plans for the block, including the plan to drill another wildcat – called Bonboni.

John J. Christmann IV, Apache’s chief executive officer, and the president said: “During the third quarter, we completed operations on Kwaskwasi, our third oil discovery in Block 58 offshore Suriname this year and our best well in the basin thus far.

“We have now filed appraisal plans for the Maka and Sapakara discoveries and will submit the Kwaskwasi appraisal plan by year-end. Operations continue on the fourth exploration target, Keskesi, and we have also selected our fifth exploration well, Bonboni, which will be situated in the North Central portion of Block 58.

“We are in the process of transitioning operatorship to Total and look forward to robust Suriname exploration and appraisal programs in 2021.”

The also company said it was nearing award of two rig contracts rigs for the 2021 exploration & appraisal program.

Namely, the contract for the Noble Sam Croft drillship, which is currently drilling the Keskesi well, is set to expire in mid-January 2021, after which the rig will move to Guyana where it will drill for ExxonMobil.