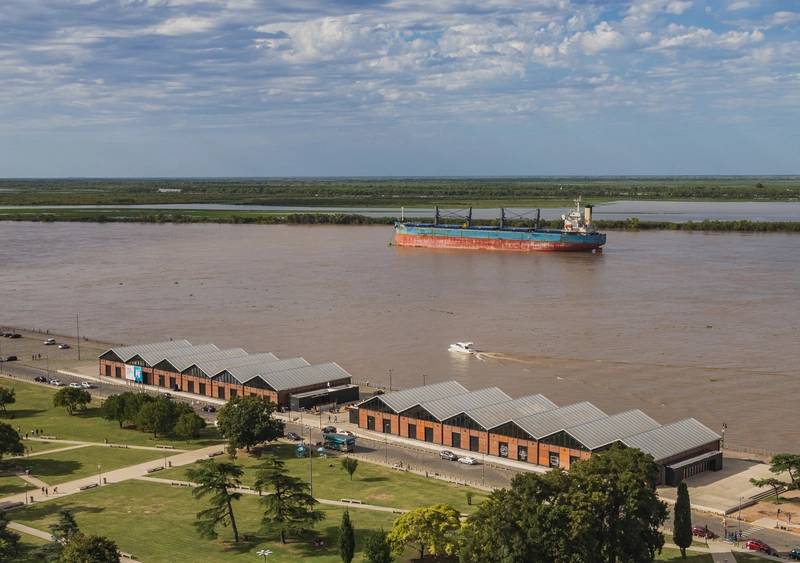 Argentina’s main grains port of Rosario was snarled on Friday in the aftermath of a 48-hour strike by tugboat captains and other workers managing the flow of agricultural cargo ships, who are demanding access to COVID-19 vaccines, port authorities said.

Seven ships—six of them large Panamax vessels—that had been loaded with soy and other farm products were stranded at their docks, unable to embark due to the falling water level of the Parana River at Rosario, according to a letter to the government signed by three chambers representing port operators.

Unions representing workers demanding to be classified as “essential,” in order to qualify for the vaccines, halted activity from Tuesday afternoon through Thursday. They warn that another 48-hour work stoppage will be held next week if the government does not adequately address their concerns.

“The strike generated a total breakdown of logistics, causing congestion at anchorages and making it impossible for new ships to arrive at port to load,” according to the letter signed by Argentina’s Port and Maritime Activities chamber and other port authorities.

They are asking the transportation ministry to help unblock Rosario, from which about 80% of Argentina’s farm exports are shipped. Agriculture is Argentina’s biggest source of export dollars at a time when central bank reserves are being strained by a weak peso and a recession exacerbated by the pandemic.

Argentina is tightening lockdown measures to combat a severe second wave of COVID-19, as daily cases and deaths have broken records over the last week.

Port managers were meanwhile trying to mobilize cranes and barges to unload part of the cargo of the seven ships so they can sail in the increasingly shallow Parana, which has been depleted by dry weather in Brazil, where the river starts.

“If they are not cleared to sail, these vessels will remain obstructing seven port terminals, which would not only affect logistics, but cause a collapse of the whole ports system at the height of harvesting season,” the entities said in the letter.

The shallowness of the river at Rosario ports is shaving tonnage off allowable cargos. Meteorologists do not expect the navigability of the river to improve over the short term.

Argentine growers are currently bringing in their 2020/21 soy and corn crops. The South American grains powerhouse is the world’s No. 3 corn exporter and No. 1 supplier of soymeal feed used to fatten hogs and poultry from Europe to Southeast Asia.

“We are in the middle of the harvest. We cannot stop loading,” Guillermo Wade, Rosario-based general manager of the Chamber of Port and Maritime Activities (CAPyM), said in an interview.