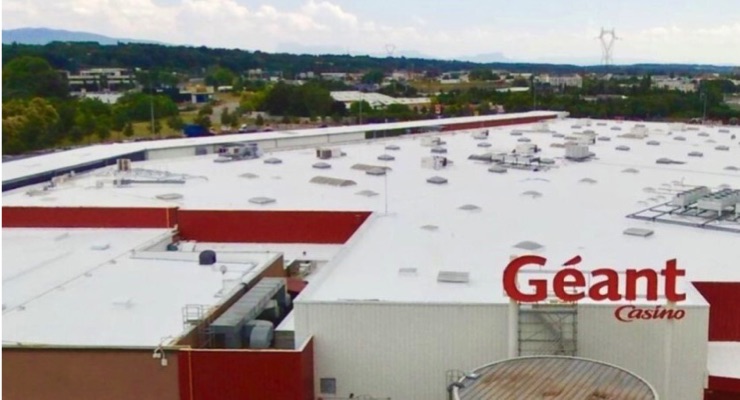 Cool Roof thus offers an extremely high-performance solution aimed at building managers in mass distribution and logistics, those most concerned by the benefits of reflective roofs, or cool roofing.

Cool Roof is the European leader in white paint solutions for the roofs and facades of industrial and commercial buildings, which reflect solar radiation and thus make it possible to protect waterproofing membranes while considerably reducing air conditioning costs during periods of extreme heat.

Kynar Aquatec is a solvent-free PVDF resin developed by Arkema for aqueous paint formulations which, when applied as a topcoat, provide lasting protection for the whiteness and reflectivity of paints for up to 20 years.

This product is unique on the market thanks to its exceptional properties of resistance to aging and mold.

It is based on Arkema’s expertise in Kynar 500 PVDF resins, which have been used for decades around the world to protect metallic coatings on buildings from corrosion and dirt.

This license will grant Cool Roof the exclusive right to promote and use formulations with Kynar Aquatec resin on its sites in France and main European countries as well as on the Ivory Coast, Senegal, Morocco and Tunisia.

“This exclusive partnership allows us to have the best quality cool roofing offer on the market. We have already produced many white roofs protected by a topcoat based on Kynar Aquatec resin and the long-term results have met our customers’ expectations,” said Ronan Caradec, CEO of Cool Roof.

“Together we intend to work on the development of reflective roofs in France and in Europe. We are convinced that this passive air conditioning to cool buildings and cities is one of the solutions to fight against global warming,” added David Silagy, GM Europe, Arkema for PVDF Materials.

Painting roofs white is a common practice to remedy the absorption of solar radiation for areas with strong sunlight.

But conventional paints rarely resist beyond 5 years: they lose their “reflectivity” with the appearance of dirt and micro-fungi and the intensity of UV rays damage them, making them porous.

From an environmental point of view, repeatedly re-coating a damaged surface negates the benefits of reflectivity.

The transparent protective coating based on Kynar Aquatec resin helps keep the whiteness of the coating intact for over 20 years with very little maintenance.

This topcoat acts as a varnish: rainwater slides off and naturally washes away any dirt that would stick to traditional white paint.

Roof instrumentation repainted in white and protected by a topcoat based on Kynar Aquatec has shown that the overall energy cost linked to the air conditioning of the building protected can be reduced by 15 percent to 30 percent for 20 years.

In addition to energy savings, white roofs also improve the living conditions of city dwellers by combating the effects of urban heat islands. These coatings are able to return up to 95 percent of solar radiation back into the atmosphere.

Their effectiveness is assessed on the basis of their SRI index (Solar Reflective Index).

The higher it is, the better the cool roof coating is.

The importance of passive air conditioning through reflective roofs was first seen in the 2000s in the United States.

Today, Europe is aware that it needs to catch up. As for the Intergovernmental Panel for Climate Change (IPCC), it considers it “one of the fastest and cheapest solutions for adapting to climate change.”

The IPCC has calculated that painting the roofs white would save 1Gt/year in greenhouse gas emissions, or the equivalent of 250 million vehicles worldwide.

Roofs that are ideal candidates for cool roofing such as hypermarkets, storage warehouses, factories are not lacking global surface area. Cool Roof estimates that in France alone, flat commercial roofs and terraces represent around 500 million m².