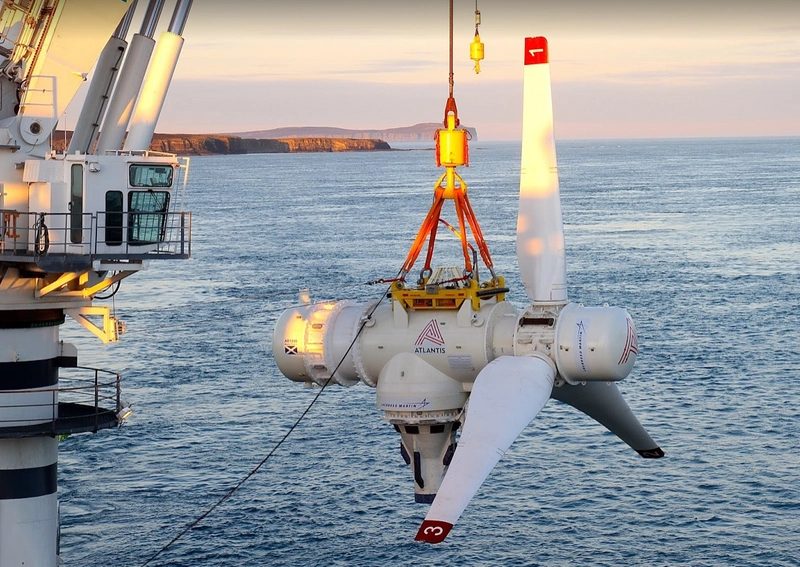 Tidal energy developer Atlantis, with its partner Asturfeito SAU, has said that the two companies’ variable pitch system for tidal turbine generators project (VPSTTG), aimed at reducing has been given the green light to proceed to the manufacturing stage.

As a result of the €1 million grant from EU’s  Executive Agency for Small and Medium-sized Enterprise (EASME) to support the development of the project, Atlantis said it was now able to progress with its mission to reduce the cost of energy generated by tidal technology via the production of an affordable Variable Pitch System (VPS).

Below is the detailed description of the project and its purpose as shared by EASME:

“This project and grant is key to developing a reliable, low-cost tidal turbine that can be installed in a demonstration project further reducing the LCoE (Levelized Cost of Energy) of tidal energy.

The challenges in tidal power technology deployment remain intrinsically linked to its levelized cost of energy (LCoE), the reliability of technology and experience from installed capacity. Atlantis still faces a significant technical challenge in the supply of its Variable Pitching Systems (VPS). The VPS is responsible for the safe control of the turbine’s rotor speed and power generation throughout each tidal cycle, through the mechanical adjustment (pitching) of each blades’ angle of attack relative to the tidal flow. This critical mechanical adjustment is achieved using the system’s actuation unit, and it is this unit that is not readily available at the specification Atlantis require to withstand the highly demanding subsea environment.

At present, the VPS component accounts for a disproportionate amount of the turbine capital cost, but is critical for optimum power generation and consequently, revenue. But as well as needing to make the VPS more cost-effective, there is a requirement to significantly change its functionality. The Atlantis AR1500 turbine installed at MeyGen is one of the company’s key enablers to increasing its global competitive advantage and is Atlantis’ pilot turbine which will lead into the development of future tidal turbine demonstration projects around Europe and the world. The current design requires each turbine in an array to have a subsea cable to transmit power and communications to and from the shoreline.

The Atlantis Turbines and Engineering Services (ATES) team have identified a new turbine design that would enable an array of turbines to all share one subsea cable which would drastically reduce tidal turbines LCoE – by an estimated 20%. This will be achieved by running the turbines in a fix speed mode, which means that significant cost savings can be achieved by reducing the amount of offshore cables required and much of the onshore equipment. However, to deliver this benefit the new VPS needs to deliver a pitch system optimized to provide torque control. The proposed VPS work is a key part of a significant reduction in the LCoE by enabling fixed-speed tidal turbines.

This project will be designing, manufacturing and testing of one new VPS for an upgraded AR1500 turbine. It will enable Atlantis to prove to potential investors that the right steps are being taken in order to receive funding to build three turbines at the MeyGen Phase 1B demonstration project.”

“This VPS system will be used on future turbines supporting the evolution of the tidal industry as a whole, further developing the industries European supply chain and giving the planet more efficient and affordable access to renewable energy,” Atlantis said Monday.

Drew Blaxland, Director of the Atlantis Turbine and Engineering Services Division, said: “This is an exciting time for the company as we work together with Asturfeito to make the cost of tidal energy more affordable and accessible for all. We would like to thank the Executive Agency for their continued support and the amazing project team who have taken us to this stage”

Ricardo Rodriguez, General Manager Asturfeito said: “Our team is very proud to support Atlantis in this challenge to bring tidal energy to the next step of industrialization. At Asturfeito we believe in the development of sustainable energy sources, and this collaboration fits perfectly with our strategy.”