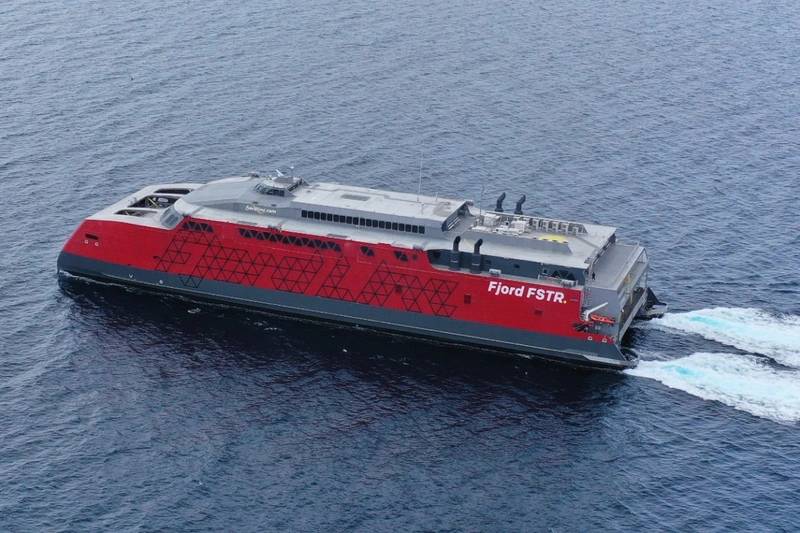 The vehicle-passenger ferry, named FSTR, is said to be the largest aluminum vessel ever constructed in the Philippines. It is currently the largest ferry (by volume) to be constructed by Austal, at any of the company’s shipyards worldwide.

Austal CEO, Paddy Gregg, said, “It’s impressive to see a large high speed ferry like this delivered in the best of times, but for the team to deliver this new vessel during a global pandemic is simply outstanding.”

Fjord Line’s FSTR is capable of transporting 1,200 passengers at up to 40 knots and features Austal’s largest ever vehicle-carrying capacity constructed to date, with a beam of 30.5 meters enabling 404 cars to be carried across two decks.

According to the builder, the ship features several key design innovations that enhance operating performance and passenger comfort, including a new, optimized hull form that will minimize fuel consumption and wake wash when operating on the Skagerrak Sea between Hirtshals, Denmark and Kristiansand, Norway.

At the vessel handover held at the Balamban Cebu shipyard, Austal Philippines President Wayne Murray said the delivery of FSTR was just the first of three large high-speed ferries to be constructed at the company’s newly expanded shipyard.

“With the delivery of FSTR, we’re now preparing for the launch of Hull 395, Bañaderos Express; a 118-meter trimaran ferry under construction for Fred. Olsen Express of the Canary Islands. Following closely behind that, we have the 115-meter Express 5 under construction for Molslinjen of Denmark,” Murray said.

Bañaderos Express, is scheduled for launch later in the second quarter of CY2021 and is a sister ship to Bajamar Express, constructed at Austal Australia and delivered in July 2020. A 115 metre high speed catamaran ferry to be known as Express 5 is a follow-up order from Molslinjen of Denmark and is scheduled to launch in the third quarter of CY2021.