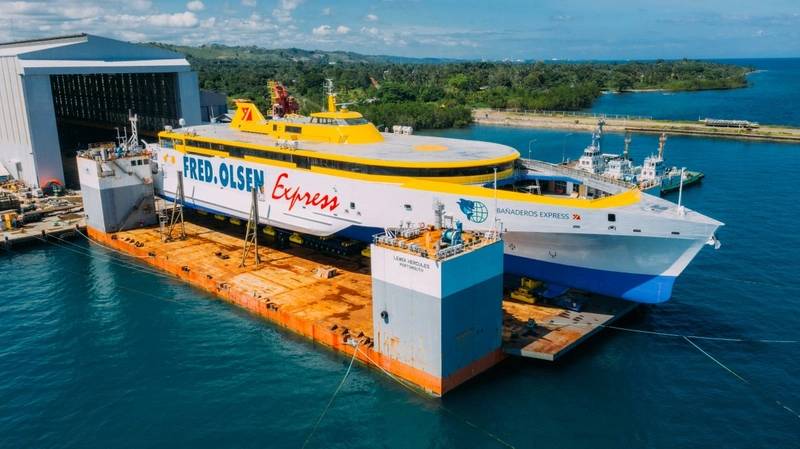 The newbuild is the second in a series of two 118-foot Auto Express ferries ordered by the Canary Islands-based operator under a A$190 million contract that has already seen sister vessel Bajamar Express delivered by Austal Australia in July 2020.

The new aluminum trimaran is capable of transporting more than 1,100 passengers and 276 cars at cruising speeds up to 38 knots. Along with her sister ship, the ferry features an optimized trimaran hull form and Austal’s MARINELINK monitoring and control system.

Austal Philippines president Wayne Murray said the launch of Bañaderos Express was yet another milestone in the continuing development of the shipyard’s capability.

“It’s truly impressive that our team have capably managed the launch of a 118-meter trimaran ferry, just weeks after the departure of a 109-meter catamaran, delivered to Fjord Line. In between, they’ve prepared our new floating dry dock while also working on yet another large ferry, the 115 meter Express 5 catamaran, ready to take up position in our main assembly bay,” Murray said.

Fred. Olsen S.A.’ CEO, Andrés Marín, said, “Seeing the images of Bañaderos Express already afloat has been exciting. This is the moment when you realize that the new trimaran, and its incorporation to the Gran Canaria and Tenerife ‘maritime bridge’, is an imminent fact.”

Marín highlighted that “Bajamar and Bañaderos are sister vessels, hence, our third trimaran maintains the characteristics and innovations of the Bajamar Express, where all the design details have been oriented to offer an unbeatable passenger experience.”