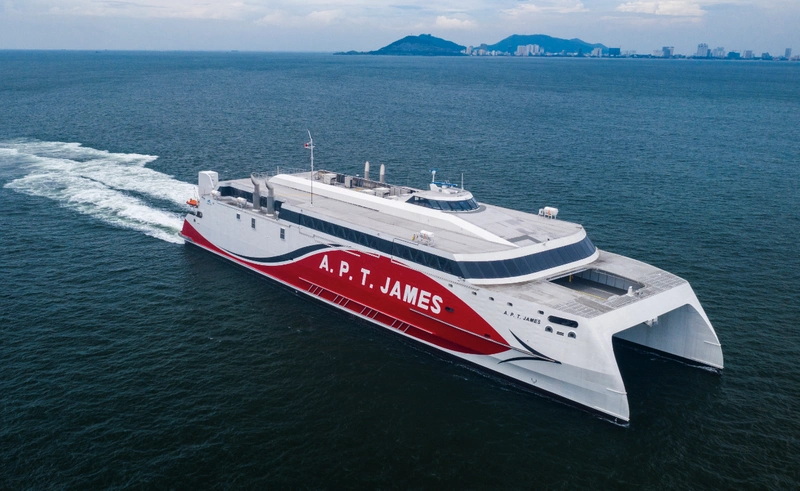 Shipbuilding group Austal announced Friday that its Vietnam yard opened in 2018 has delivered its first vessel fully constructed at the Vung Tau shipyard.

The 94-meter high-speed catamaran A.P.T James was officially handed over from Austal Vietnam to the National Infrastructure Development Company (NIDCo), to be used for maritime transport services on the Trinidad and Tobago ‘sea bridge’ route between the islands.

The Auto Express 94 vehicle-passenger ferry was designed at Austal Australia and features the company’s signature raked bow and optimized hull design. The all-aluminum high speed catamaran has capacity for 926 passengers and 250 cars, and is capable of speeds up to 37.5 knots. The ship features the latest in Austal’s ‘smart ship’ technology, including an advanced motion control system, to deliver a more comfortable and stable ride for passengers and crew.

A.P.T James is named after the Tobago-born politician, best known as an advocate for political, social and economic development in Tobago before and during his service on the Legislative Council of Trinidad and Tobago from 1946 to 1961.

Austal chief executive officer, David Singleton, said the delivery of the first major commercial vessel from the Austal Vietnam shipyard in less than two years since its opening “is an outstanding achievement for both Austal Vietnam and the Austal Group as we continue to focus and consolidate our defense and commercial vessel capabilities in strategic locations throughout Australasia.”

“Austal Vietnam is now clearly a valuable asset in our commercial vessel shipbuilding network, building upon and complementing the growing capability in the Philippines, while also freeing up capacity in our Australian shipyard for additional defense contracts for the Royal Australian Navy and export markets.”

Austal Vietnam is well advanced on the shipyard’s next project, a new 41-meter high speed catamaran ferry for SGTM of Mauritius, due for delivery in the first half of 2021.