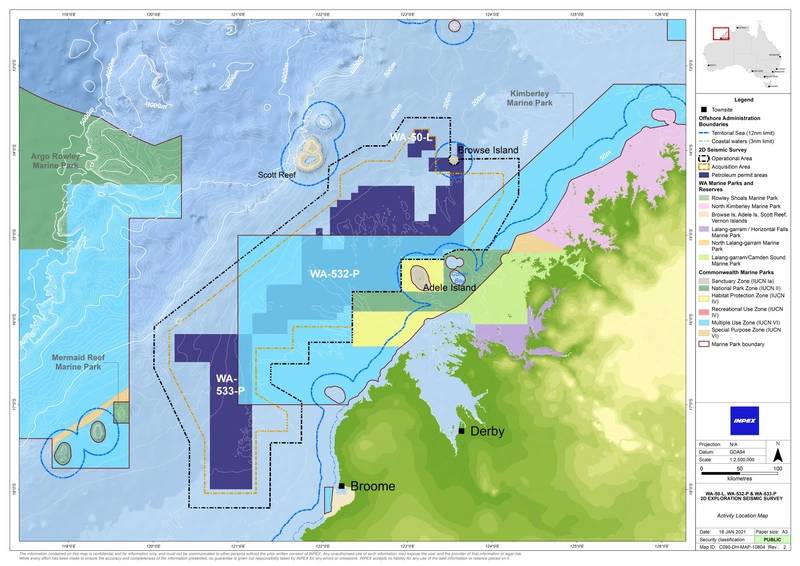 Inpex’s proposed survey will cover the WA-532-P and WA-533-P offshore blocks in the Browse and Offshore Canning Basins, as well as the Production Licence WA-50-L, also within the Browse Basin.

At the closest point, Japan-based Inpexs will carry out the survey activity over 87 km west of Broome and 42 km offshore from the Dampier Peninsula. Seismic data acquisition will mainly take place in water depths between approximately 50 m and 600 m below mean sea level.

The survey will be undertaken by a seismic survey vessel towing an underwater seismic source and a single streamer behind it. The seismic source will be towed behind the vessel at water depths of approximately 5-10 meters.

The seismic source will use compressed air to emit regular pulses of sound which reflect off the seabed and underlying geological rock formations and structure boundary. The reflected sound will be received by the streamer, which may be up to 6-10 km in length and will be towed behind the survey vessel at a water depth of approximately 5-15 m.

According to NOPSEMA, based on the environmental risk assessments presented in the Environment Plan (EP), an acceptable window of opportunity was determined to be from November 1 to May 31 in any calendar year that the EP applies.

The seismic survey operation will last approximately 140 days, but to allow for potential adverse weather and operational downtime, the survey may occur over a longer period, and so the survey vessel may be present in the Operational Area for up to 210 days, NOPSEMA said.