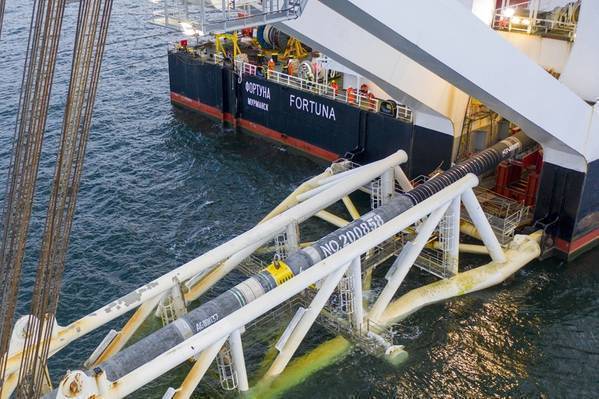 Austria is sticking with its opposition to including the Nord Stream 2 gas pipeline in a package of sanctions against Moscow that the European Union is preparing in the event Russia invades Ukraine, Foreign Minister Alexander Schallenberg said on Friday.

Austrian oil company OMV is one of Russian gas giant Gazprom’s partners in the pipeline project connecting Russia to Germany, which has been completed but is not yet operational as it is awaiting German and EU regulatory approval. Austria owns 31.5% of OMV and backs the project.

U.S. President Joe Biden said on Monday the United States would “bring an end” einen eigentlich sehr erfreulichen, starken Konsens auf europaeischer ebene verspuert to the $11 billion project if Russia, which has amassed more than 100,000 troops near Ukraine, invades the country. Washington has long pushed against Nord Stream 2, saying it will only increase Europe’s dependence on Russian gas.

“I once compared it to a car without an engine. It is not even operational,” Schallenberg told Reuters in a brief telephone interview.

“To discuss it publicly in Europe as if it were a central element of a credible package of sanctions against Russia makes no sense to me logically,” he added.

German Economy Minister Robert Habeck said earlier on Friday the Ukraine crisis would play a role in the approval process for the project, and Schallenberg argued sanctions would not be necessary.

“It is unthinkable that the German authorities would grant the technical approval for operations if it comes to an act of military aggression,” Schallenberg said.

Austria would, however, “support a consensus” regarding sanctions on the project, he said, without elaborating.

In addition to depending on Russia for 80% of its natural gas, Vienna has a vested interest in Russia’s banking sector as the country is Austrian lender Raiffeisen Bank International’s biggest market. Raiffeisen has a total exposure to Russia of 22.9 billion euros ($26.1 billion).

The European Union says it is ready to impose “massive” economic sanctions on Russia if it invades Ukraine, but officials say https://www.reuters.com/world/europe/eu-faces-complex-task-it-tries-agree-russia-sanctions-2022-02-02 that depends on complex negotiations among member states that are far from complete.

Schallenberg said discussions were “very advanced” and nothing was ruled out, but he declined to provide details. There was a “strong consensus,” he added.

“There is no question that if there is military aggression, there must be a clear, unified and strong response from the West,” he said.