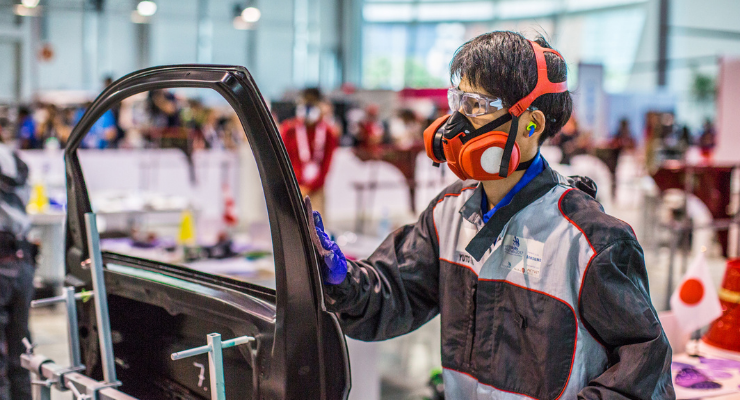 BASF’s Coatings division has signed a new multi-year Global Industry Partnership with WorldSkills International. The agreement continues BASF’s long-standing commitment to developing new talent in the automotive refinish industry and solidifies BASF’s support of the next global WorldSkills Competition, which will be held in Shanghai, in October 2022.

Founded in 1950 and held every two years in different parts of the world, WorldSkills Competitions are the gold standard of excellence for up-and-coming talent to show off their vocational skills. Young Competitors reach new heights, while getting the training and skills needed to enter the world of work. WorldSkills Competitions have been on hold since 2020, due to the global pandemic, and BASF’s sponsorship is meant to help Competitors embrace the challenge, reconnect, and recalibrate after the delay.

“BASF realizes the need for young, well-trained talent is growing worldwide, and is proud to partner with WorldSkills,” said Fabien Boschetti, Director, Global Marketing, Automotive Refinish Coatings Solutions.  “The event brings together young people, industry, government, education, and institutions to promote the benefits of our industry. It helps them turn their passion into a profession as a skilled car painter.

“Vocational skills are more important than ever. Young people will lead us on the road to global economic recovery and help us confront future challenges,” said Boschetti. “BASF is proud to partner with WorldSkills International for the next three years through this agreement with the first right to continue beyond that.”

Competitors from more than 60 countries are expected to attend the 46th WorldSkills Competition on October 12-17, 2022 in Shanghai, China. Car Painting is one of the 63 different skill competitions that will be held. Those competing in the Car Painting category will use products from BASF’s premium refinish brand Glasurit, as they have in the past.

“As the world and BASF prepares for the grand finals of WorldSkills Competition in Shanghai this year, we’re very excited to use our extensive knowledge, people, and training excellence supported by Refinity® digital tools in China on a global platform to help prepare a next generation of spray painters in a refinish world now driven by sustainability and digitalization benchmarks. The program will help build both economic and social prosperity in the profession,” said Patrick Zhao, Senior Vice President, BASF Coatings Solutions Asia Pacific.

At the same time, WorldSkills will open its WorldSkills Museum to the public. Situated on the banks of the Huangpu River in Yangpu District, the museum is the first of its kind in the world. New exhibits, including Glasurit, will tell the story of how skills have changed and impacted the lives of people and societies around the world.