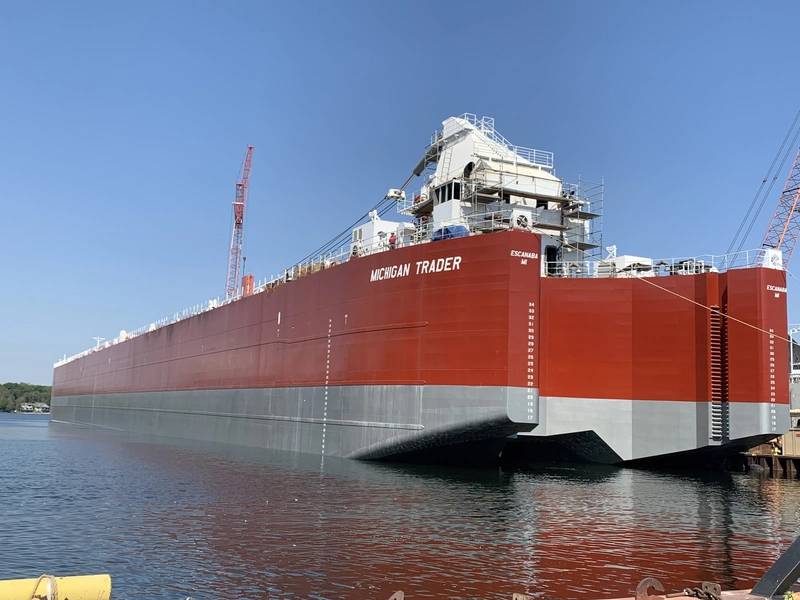 Fincantieri Bay Shipbuilding has delivered a newly built self-unloading barge to VanEnkevort Tug & Barge for operation on the Great Lakes.

David Groh, president of VanEnkevort Tug & Barge, said Michigan Trader will be the fourth self-unloading barge in the company’s Great Lakes fleet. The barge will be the 10th in the VTB fleet, with services on the Great Lakes, Mississippi River and Gulf of Mexico.

“The repair work that Fincantieri Bay Shipbuilding has completed for us over the years has been good,” Groh said. “We are happy to have partnered with them for this new vessel and are thrilled to support the Great Lakes region and its industry. Our growing customer base has supported our vision and we have responded with this newbuild barge.”

Utilizing materials and parts from suppliers across the Midwest, the project’s supply chain includes local suppliers such as Broadwind Heavy Industries of Manitowoc, Wis. which built the Michigan Trader’s 265-foot boom. Northern Machine & Repair Inc. provided its hatch covers, and Marine Travel Lift in Sturgeon Bay, Wis. manufactured the cargo hatch crane along with many more local parts and services.

“We are happy to have supported the Great Lakes economy during the challenging times of the COVID-19 pandemic.” Thayse said. “From boom to hatch crane, and everything in between, this vessel shows the greatness of Wisconsin and Midwest manufacturing and our Fincantieri Bay Shipbuilding employees.”