BIMCO: Zero Tonnes of Saudi Crude Oil Imported by the US

In the seven days up to 1 January 2021, the US did not record any crude oil imports from Saudi Arabia. It is the first time this has happened. Previously, imports have averaged several hundred thousand barrels per day (bpd), BIMCO said in “BIMCO’s Shipping Number of the Week” report.

For the moment, this drop to zero appears to be a one off as imports in the week ending 8 January totalled 328,000 bpd. The drop does however not come completely out of the blue as volumes on this trade have been falling for many years now.

On average, the US imported 497,000 barrels per day from Saudi Arabia in 2020, continuing year-on-year declines since 2012 when imports averaged 1.4m bpd.

“For what has long been a very important trade for tanker shipping, the US’ decreasing reliance on crude oil from the Middle East means an adjustment to trade flows, with Persian Gulf crude oil exports primarily heading east and US exports of crude oil becoming more important than their imports of the same,”  says Peter Sand, BIMCO’s Chief Shipping Analyst.

“This means several trade pattern adjustments for the oil tanker shipping industry, but given the long sailing distances, not necessarily bad ones” Sand says.

“BIMCO expects US imports of crude oil from the Persian Gulf to decline in 2021 compared to 2020,” he adds. 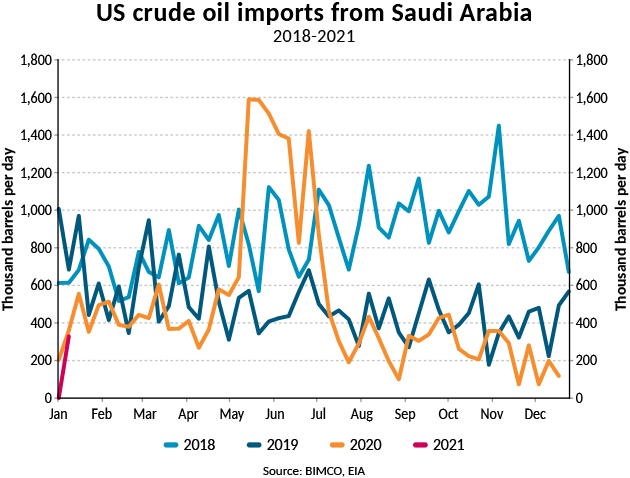