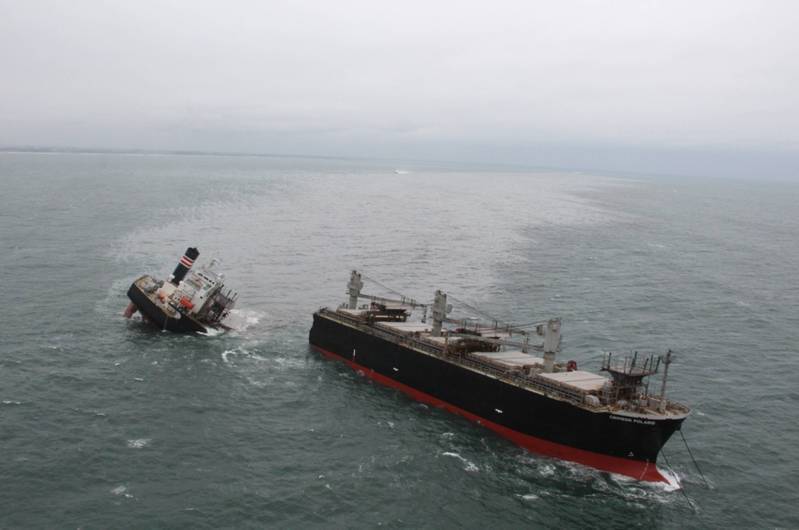 The Crimson Polaris wood-chip carrier’s bow section was towed into Japan’s Hachinohe Port and moored there on August 27, according to the ship’s charterer NYK. The Crimson Polaris split up after running aground near Hachinohe, Japan earlier this month.

“Due to the weather and sea conditions, the work to remove the oil from the bow of the vessel at sea was expected to take a long time, and in order to make the work smoother and safer, the shipowner and ship-management company towed and moored the vessel in Hachinohe Port with the understanding and cooperation of the local government, related organizations, fishermen, and other concerned parties,” NYK said Monday.

The 199.9 meters long vessel is owned by MI-DAS Line, an affiliate of Doun Kisen. The vessel ran aground off Hachinohe on August 11. On August 12 at 4:15 a.m. the vessel’s hull split into two pieces and began spilling oil. The ship had about 1,550 MT of heavy oil and about 130 MT of diesel oil for fuel at the time of the incident. It is not clear how much oil has been spilled into the ocean.

“As for the stern section, the Japan Coast Guard and related parties are continuing their investigation,” NYK added.

“NYK will continue to make every effort to resolve the situation as soon as possible in cooperation with the shipowner, ship management company and other related parties,” the Japanese shipping firm said.

NYK last week said it would send 110 employees in total by September 11 to help with the clean-up at the area where the NYK-chartered Crimson Polaris wood-chip carrier ran aground, dropping cargo and spilling oil into the sea as the hull of the vessel split in two.NYK said last Tuesday it would make a total of 11 dispatches of 10 employees each by September 11 to assist with the area clean-up.