UK-based oil and gas firm IOG said Friday it had struck a new gas sales agreement (“GSA”) with BP Gas Marketing Limited (“BPGM”), for the gas to be produced from its gas fields in the southern North Sea, offshore the UK.

The covers its equity gas from all of the Saturn Banks Phase 1 fields (Blythe, Elgood, Southwark), plus the Nailsworth and Elland fields which are part of Phase 2, in the southern North Sea, on a long-term basis with break clauses after September 2023.

The GSA replaces the gas sales agreement originally signed with BPGM in February 2014, which covered the Blythe field only, on improved terms for IOG, the company said.

IOG said Friday that under the GSA with BP, gas will be sold on a day-ahead daily nomination basis at a price linked to the National Balancing Point (NBP, the UK traded gas benchmark). The GSA incorporates the potential, subject to credit approval, for physical gas hedging up to 50% of forecast production over various periods, in line with the company’s hedging strategy.

IOG last week said that the onshore reception facilities for its Saturn Banks project development had been successfully commissioned, in what is the final step to first gas from its Southern North Sea gas fields. As previously reported, work on the reception facilities had been hampered by stormy weather in February. IOG said a week ago that first gas from both Blythe and Elgood was set to start flowing in around a week.

Southwark drilling to resume this month 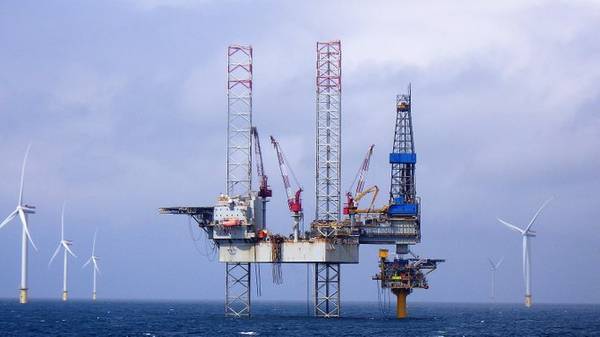 The Noble Hans Deul rig on location over the Blythe platform, with Dudgeon wind farm in the background. (File Photo: IOG)First gas from the Southwark field is expected later this year, as the drilling ops have in recent months faced technical issues. First, the company had to stop drilling preps in October 2021, an issue with one of the legs on the Noble Hans Deul jack-up drilling rig, and then, just after spudding the well on December 30,  IOG hit another setback as it had to move the Noble Hans Deul rig jack-up rig from the Southern North Sea drilling site due to the challenging seabed conditions.

In a statement on Friday, IOG said it has “been making good progress with the required regulatory and commercial processes to implement the rock dumping solution to the seabed scour issue at the Southwark field location.”

Andrew Hockey, CEO of IOG, said:”It is another very positive step for IOG to have this more comprehensive Gas Sales Agreement in place with a highly credible counterparty in BP Gas Marketing with whom we have enjoyed a long relationship already.

In parallel, I can confirm that the backgassing and ready-for start-up processes [for Blythe and Elgood] have been proceeding this week as planned.”

Hockey did not say when exactly he expected the gas to start flowing.