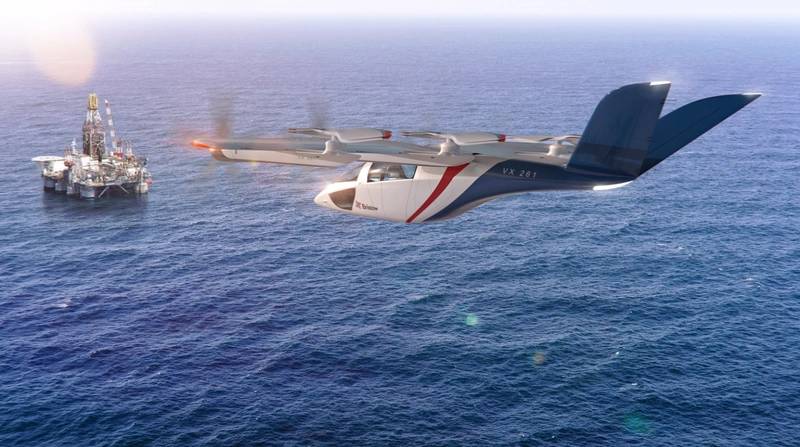 Bristow Group, a company best known to Offshore Engineer readers for its offshore crew transfer helicopters, has signed a Memorandum of Understanding with aeronautical engineering firm Vertical Aerospace Group for certification, operational planning, and potential purchase of up to 50 eVTOL aircraft.

Vertical has developed the VA-X4, a piloted electric, zero-carbon operating emissions, vertical take-off and landing (eVTOL) aircraft capable of carrying four passengers with a top speed of up to 200 mph (174 knots) and a range of 100+ miles (161+ kilometers).

Bristow said the two companies would explore commercial taxi flights in new and emerging markets for Bristow operations using the Vertical VA-X4 aircraft in various geographic locations. According to Bristow,  near-silent when in flight with zero emissions and low cost per passenger mile.

Bristow did not share info on any planned usage of VA-X4 for offshore oil and gas operations, however, it provided a hint by sharing an illustrative image of the VA-X4 apparently en route to a semi-submersible offshore drilling rig. Bristow did not reply to OEDigital’s request for more info on the potential deployment of VA-X4 in the offshore energy industry environment.

Bristow President and Chief Executive Officer Chris Bradshaw said: “Our MOU with Vertical allows us to build upon our leadership position in the vertical transportation market for the past 70+ years and now sets the stage for the disruptive advantages of the VA-X4 with its zero carbon emissions and low operating costs for passenger transport.

“Our expansion into these new and existing geographic markets with sustainable, innovative and efficient vertical lift and aerial transport services will offer passengers superior regional air mobility solutions,” said Bradshaw. “As the global leader in vertical lift, Bristow’s operational expertise and efficiency, supported by the trust and confidence of our customers, can safely bring eVTOL aircraft into the market.”

“Bristow’s global expertise and reach means it is the perfect partner for Vertical as we seek to pioneer the transition to zero emissions flight. We look forward to working with Bristow and accelerating the commercial operation of eVTOLs,” said Stephen Fitzpatrick, Founder and CEO of Vertical Aerospace.

Under the MOU, the two companies have agreed to develop a joint working group to collaborate on the following areas: regulatory and airspace; demand, fleet size, spare parts and infrastructure; potential customers; and public acceptance and environmental requirements.

Bristow last year merged with rival Era, creating a company that has a fleet of more than 300 of the industry’s “most modern aircraft with the latest generation of technology and safety features,” and the world’s largest operator of S92, AW189, and AW139 model helicopters.

The company provides offshore aviation transportation and search and rescue solutions in the Americas, Nigeria, Norway, the United Kingdom, and Australia.