Tyra – Denmark’s largest gas and condensate field and main gas processing hub – was, a few years ago, on the verge of being decommissioned, which would have, according to report back then, wiped thousands of jobs.

The field located 225km west of Esbjerg, consisting of two main centers Tyra East and Tyra West and five satellite platforms, had been in production since 1984, and the offshore facilities were approaching end of life, and the seabed subsidence had threatened the integrity of the sinking platforms, too.

Maersk Oil, the then operator, had spent millions of dollars reinforcing the Tyra structures over the years. However, it in January 2017, said the facilities were no longer safe for work, having sunk five meters deep over the years, and warned it would shut down the field for good on October 1, 2018, shoud no viable economic solution for the development of the field be found.

The shutdown would have meant not just the end for Tyra, but also for the satellite fields and would have discouraged future drilling attempts nearby, leaving potentially discoverable resources stranded below the seabed.

Luckily, just a few months after the shutdown warning, an agreement was reached with the Danish government, paving the way for a full redevelopment plan and life extension for the Tyra project, as well as setting the ground for future exploration nearby.

Maersk Oil operated the field at the time, on behalf the Danish Underground Consortium, with other partners being Shell, Chevron, and the state-owned Nordsøfonden.

The full redevelopment of the field was approved by the DUC partners in December 2017, calling for partial removal of old infrastructure and installation of new jackets and topsides.

More specifically, the redevelopment calls for removal and decommissioning of the prior Tyra platforms, reuse, and 10-13 meters extension of the current jackets at six platforms that will have new topsides and a totally new process platform and a new accommodation platform.
With the investment estimated at more than $3.3 billion, the Tyra redevelopment became the largest investment ever in the Danish North Sea. 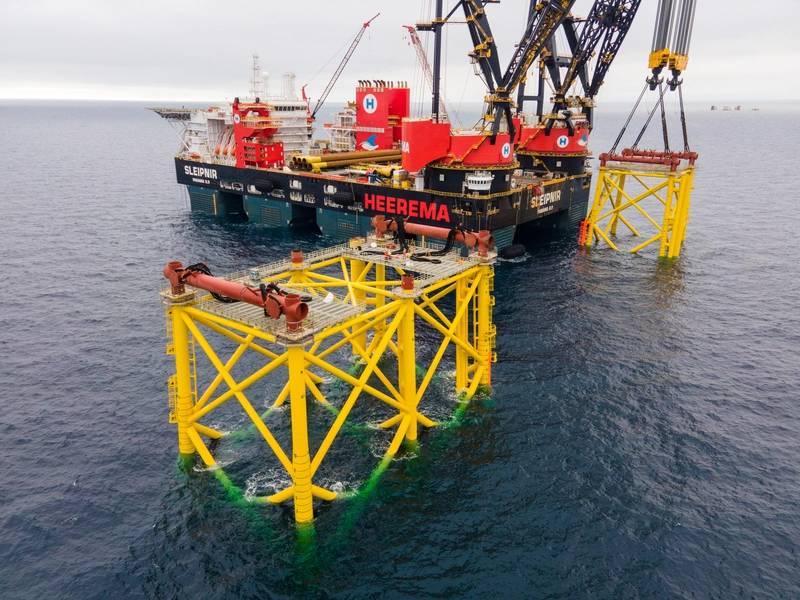 So, Where are we now?

Fast forward to 2020. The DUC consortium membership has changed so much that the only company that was there in 2017 when the agreement for the redevelopment was reached is Nordsøfonden.

Maersk Oil was bought from Maersk by France’s Total in a deal estimated at $7.45 billion, struck in 2017 and completed in March 2018. In September of the same year, the French oil major bought out Chevron’s Danish business, increasing its operatorship in the DUC from 31.2% to 43.2%. In October 2018, Shell agreed to sell its Danish upstream business to Norwegian Energy Company (Noreco) in a deal valuing Shell’s assets at around $1.9 billion.

Noreco’s Chairman Riulf Rustad told Reuters at the time that the two companies had been negotiating the deal since January 2017, the month when Maersk warned about the potential shutdown.

No, Really … Where are we now?

OK, the previous passage was still talking about a relatively distant past as compared to “now.”

Now, in 2020, the Tyra site has been a busy one, and we know this thanks to Noreco, which has become an unofficial PR for the project this year, regularly sharing updates on the redevelopment milestones.

The summer saw the Dutch heavy-lifting expertise and technology –  humongous vessels owned by Heerema Marine Contracts and Allseas – in action.

Heerema Marine Contractors had won the contracts for heavy-lifting work on the Tyra redevelopment with the Sleipnir semi-submersible crane vessel back in 2017, while the giant crane ship was still under construction in Singapore.

The scope awarded to HMC under two contracts included offshore lifting services in the Tyra East and West complexes related to the replacement of the wellhead and riser platform topsides, as well as the transportation and installation contract for the processing & accommodation platform.

The Sleipnir, named after Odin’s eight-legged stallion as it has four vertical columns on each side of the vessel, was delivered in 2019, embarking upon a globetrotting tour, first working in the Mediterranean Sea, then in Trinidad, before arriving to the North Sea with a packed calendar.

The LNG-powered semi-submersible crane vessel, equipped with a pair of revolving cranes that can lift 20,000 tonnes in tandem, in July 2020 completed the first phase of the Tyra decommissioning when the topsides, including wellhead and riser platforms, were removed.

The second phase of the decommissioning campaign consisted of two main lifts of the two integrated accommodation and processing platforms at Tyra East and Tyra West.

Allseas’ giant catamaran Pioneering Spirit was employed for this part of the campaign, removing both topsides in single lifts.

The 14,000 tonne TEA topsides and 7,800 tonne TWA topsides were removed with the vessel’s motion-compensated topsides lift system. For the smaller, lighter structures, the vessel’s new aft-mounted 5000 t crane was deployed.

The two topsides will be dismantled at the recycling yard M.A.R.S. in Frederikshavn, and more than 95 percent of the old platforms are expected to be recycled.

“The recycling of old Tyra is to date the largest offshore recycling project carried out in Denmark, “Noreco said in August.

The removed topsides will be replaced by one new processing platform and one new accommodation platform. The four wellhead platforms and two riser platforms will have their jackets extended by 10-13 meters.

The part with jackets brings us back to the eight-legged stallion, the Sleipnir, but unlike the previous trip that was all about decommissioning, this one is about installation.

Namely, the Sleipnir in September returned to the Tyra location, where it then installed two new Dragados Offshore-built jackets, which form the foundation for the new Tyra process and accommodation platforms. The two jackets were the first new jacket structures delivered and installed for the Tyra redevelopment project.

Commenting on the installation of the jackets, David B. Cook, who became CEO of Noreco in July 2020, said: “The delivery and installation of these jackets is an important achievement for the project and a true testament to our ability to consistently deliver in-line with expectations, in both a safe and predictable manner. The milestone marks a clear shift for the Tyra Redevelopment project, moving our focus onto completing the new modules. Each milestone moves us toward a state-of-the-art facility in the North Sea.

“The Tyra Redevelopment will not only improve safety and increase Noreco’s production as well as operational efficiency, but also at the same time lower CO2 emissions and unit costs,” Cook said.

According to info on Noreco’s website, the use of new technology and modernized working processes will see Tyra’s operating efficiency increase, and at the same time reduce CO2 intensity.

Total expects that the redeveloped Tyra will reduce 30% of CO2 emissions, 90% of flaring, and improve overall operational energy efficiency.

With the installation of new jackets, the new phase – the installation phase – started for Tyra.
The next milestones are for the new topside modules currently being built to be delivered from the yards and transported to the Danish Continental Shelf for installation.

The wellhead and riser modules are currently being built in Singapore, the accommodation module in Italy and the processing module in Indonesia.
The topsides are expected to sail away in 2021 and are slated for the installation at the Tyra in the same year, ahead of the first gas in 2022. Once online, the redeveloped Tyra will produce enough gas to power 1.5 million homes in Denmark, with production at peak expected at 60000 boepd. 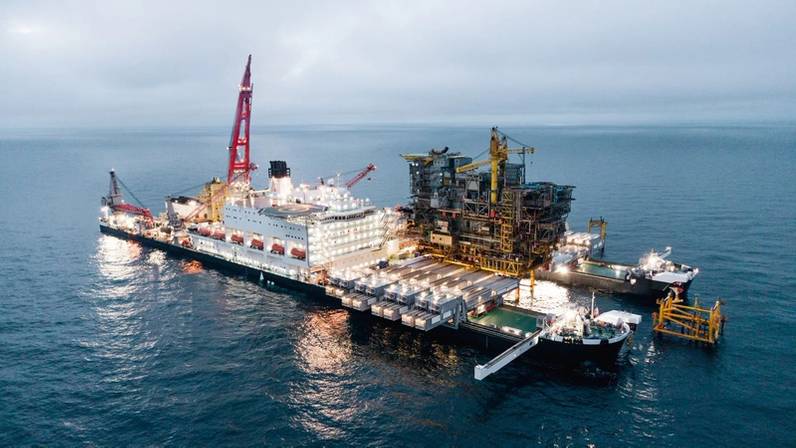