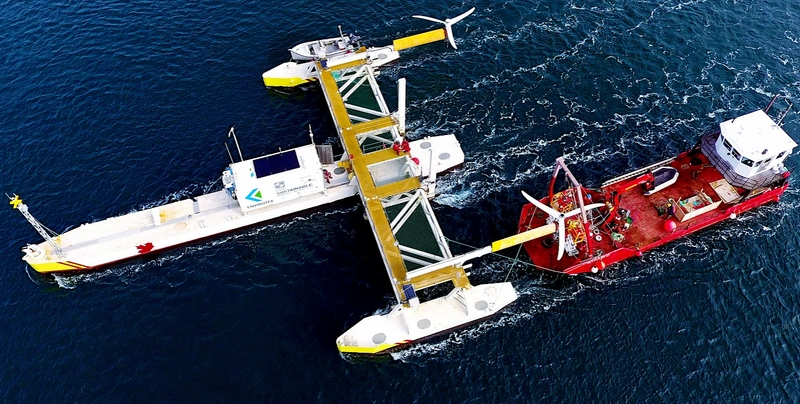 Sustainable Marine has developed a floating tidal energy platform called PLAT-I that has undergone testing on the waters of Grand Passage for nearly two years.

A second platform is currently being assembled in Meteghan, Nova Scotia and will be launched in Grand Passage later this year for testing before relocation to the Fundy Ocean Research Centre for Energy (FORCE) in 2021. These platforms will make up the tidal energy array.

According to the government, the objective of the project is to provide up to nine megawatts of predictable and clean renewable electricity to Nova Scotia’s electrical grid.

This will reduce greenhouse gas emissions by 17,000 tonnes of carbon dioxide a year while creating new jobs in the province. The project will also demonstrate the ability to harness tides as a reliable source of renewable electricity to power homes, vehicles, and businesses.

Seamus O’Regan, Canada’s Minister of Natural Resources, made the investment announcement at the Marine Renewables Canada 2020 Fall Forum, which brings together its members and industry to identify opportunities and strategize a path forward for marine renewable energy sources.

“We are harnessing the power of our tides to power our homes, our businesses and our communities. This is how we build our clean energy future.” Seamus O’Regan, Canada’s Minister of Natural Resources

“This investment will not only help propel the tidal energy industry forward in Nova Scotia, it also highlights how it can drive innovation that can lead to new jobs. It is a new and innovative approach to generating tidal energy that once again shows that Nova Scotia is the right place to explore the potential of this industry,” said Derek Mombourquette, Nova Scotia Minister of Energy and Mines

Jason Hayman, CEO Sustainable Marine, said, “Nova Scotia has one of the best natural resources in the world for tidal energy and provides the infrastructure and support for companies looking to grow their business. Having a demonstration site such as FORCE enables us to accelerate the commercialization of our technology. This investment will not only advance our tidal energy technology but also provide a source of clean renewable energy that has a positive impact on rural coastal communities and the environment.”

Elisa Obermann Executive Director, Marine Renewables Canada, said, “Tidal energy is a prime example of a sector and clean technology that can spur economic development while helping Canada achieve its goals to reduce carbon emissions and act on climate change. Sustainable Marine has already successfully engaged local suppliers in its Grand Passage project, and this new project at FORCE creates more opportunities, particularly for firms with experience from other marine industries such as offshore oil and gas that are looking to diversify their business into renewable energy.”