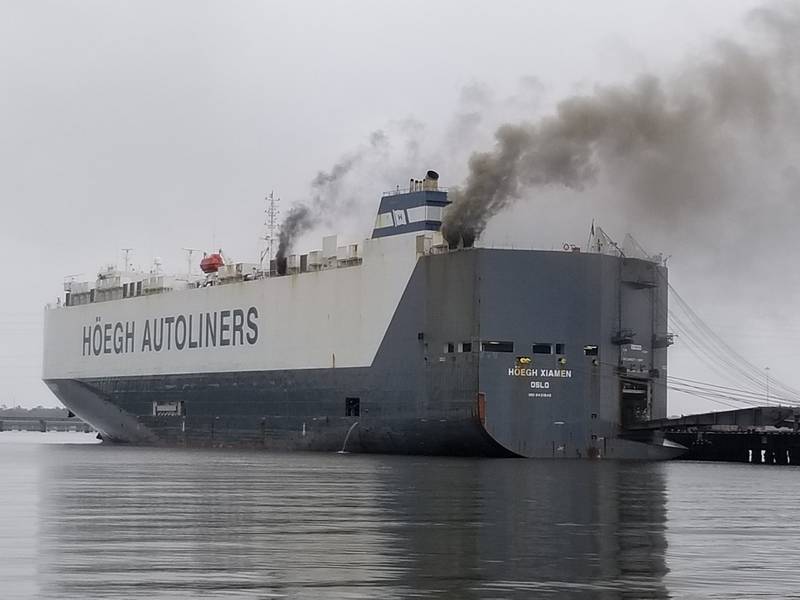 An electrical fault from an improperly disconnected battery in a used vehicle led to the fire aboard vehicle carrier Höegh Xiamen that resulted in $40 million worth of damages, the National Transportation Safety Board (NTSB) said Thursday.

As a result of the investigation, NTSB issued eight safety recommendations to federal regulators and the companies involved in the accident.

On June 4, 2020, while the Höegh Xiamen was in Jacksonville, Fla., the ship’s crew noticed smoke coming from the ventilation housing while preparing to depart port for Baltimore, Md.

Crewmembers discovered a fire on deck 8, which had been loaded with used vehicles. The fire eventually spread to other decks and continued to burn for eight days before Jacksonville Fire and Rescue Department could extinguish the blaze. Nine firefighters sustained injuries while responding. None of the vessel’s 21 crewmembers were injured. The Höegh Xiamen and its cargo of 2,420 used vehicles were declared a total loss valued at $40 million. In August 2020, after salvage operations were completed, the vessel was towed to Turkey to be recycled.

The NTSB concluded many of the vehicles loaded onto the vessel had batteries that were not disconnected and secured in accordance with procedures, which increased the risk of electrical arcing and component faults. During loading operations, both the loading personnel and crew missed opportunities to address these hazards.

The investigation showed that the detection of the fire was delayed because the vessels’ fire detection systems had not yet been reactivated after loading was completed. Additionally, the Jacksonville Fire and Rescue Department’s response to the accident was delayed because the Höegh Xiamen’s master did not immediately have available contact information for search and rescue authorities and did not know how to report a fire to local authorities.

The NTSB determined the probable cause of the fire aboard the Höegh Xiamen was Grimaldi Deep Sea’s (who time chartered the vessel) and SSA Atlantic’s (Grimaldi’s contractor for stevedores) ineffective oversight of longshoremen, which did not identify that Grimaldi’s vehicle battery securement procedures were not being followed. This resulted in an electrical fault from an improperly disconnected battery in a used vehicle on cargo deck 8. Contributing to the delay in the detection of the fire was the crew not immediately reactivating the vessel’s fire detection system after the completion of loading. Contributing to the extent of the fire was the master’s decision to delay the release of the carbon dioxide fixed fire extinguishing system.

“The transportation of used vehicles, such as those that were loaded on vessels like the Höegh Xiamen, is currently excepted from Hazardous Materials Regulations when a vessel has a stowage area specifically designed and approved for carrying vehicles,” NTSB said in the report. “We found that used vehicles are often damaged and present an elevated risk of fire. We believe that greater inspection, oversight, and enforcement are needed to reduce this risk.”

There have been five similar accidents since 2015, including a 2019 fire aboard Grimaldi’s Grande Europa. Following Grimaldi’s experience with previous roll-on/roll-off vessel fires, the company developed a battery disconnect procedure to reduce the risk of vehicle fires during transportation. This procedure was used on Höegh Xiamen; however, the Coast Guard’s postaccident examination of a sample of 59 vehicles did not find a single battery that was secured in accordance with Grimaldi’s battery disconnect procedure.

“The circumstances of this accident make clear that it is critical to ensure that the batteries of used vehicles are disconnected and properly secured during cargo loading operations,” the report said. “The NTSB believes it is imperative that operators of similar roll-on/roll-off vessels engaged in the transportation of used vehicles act to ensure that any personnel involved in loading operations—including vessel crews, stevedores, and longshoremen—be aware of the importance of disconnecting batteries on used vehicles.”