In the first two months of 2021, Brazilian iron ore exports have risen by 9.1% to 53 million tonnes, driven by China. So far this year, 35.2 million tonnes of iron ore has been exported to China, representing a 15.2% increase from the same period last year and standing in contrast to slightly declining exports to all other countries: down 1.2% to 17.8 million tonnes, continuing the trend from 2020.

Despite the strong growth rates in the first months of this year, total exports of iron ore have failed to recover to 2019 levels following the 21.8% drop in volumes in 2020. Total volumes in January and February this year are down by 9.1 million tonnes compared with 2019 levels. Looking only at exports to China, these have come much closer to matching their 2019 level, but are still down by 0.6m tonnes.

China’s iron ore share jumped in 2020
In 2020, which was a year filled with disruptions, the share of Brazilian iron ore exports destined for China continued its increase, jumping to 72.6% of total world exports in the full year, an increase of almost 10 percentage points from 2019. This testifies that despite a fall at the start of the year, exports to China finished the year up by 14.2%, while exports to the rest of the world fell by 30%. Combined, total Brazilian iron ore exports fell by 2.7%.

“The iron ore market has had a strong start to 2021 as exporters have rushed to sell their cargoes given the current price of iron ore which has reached levels last seen in 2010, incentivizing exporters to sell whatever they can. It is also testament to the continued classic recovery in China which is always steel heavy,” says Peter Sand, BIMCO’s chief shipping analyst. 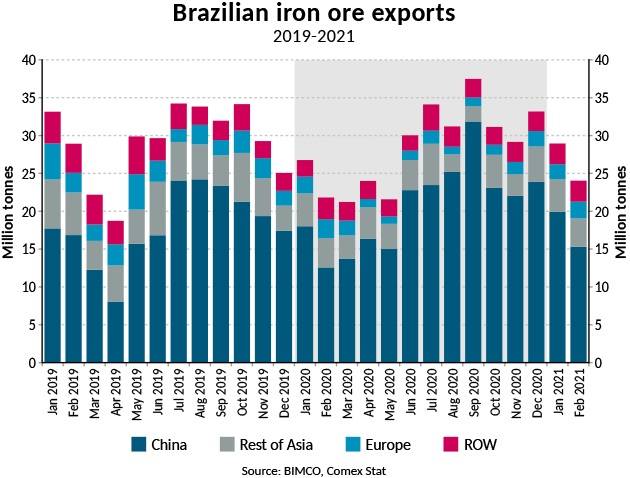 Tonne miles generated by Chinese imports from Brazil overtake those from Australia
Australian iron ore exports have also had a strong start to the year, with exports to China up by 3.4% in the first two months, reaching 111.6 million tonnes. So far, there is little indication that the disruption in coal trade between China and Australia has spread to iron ore, with both countries dependent on this trade, regardless of the current state of their relationship.

In annual volume terms, Australian iron ore exports to China are three times as high as those from Brazil. Adjusting for the long sailing distances which Brazilian exports have to cover however, the importance of both trades to the shipping industry evens out. In fact, Brazilian exports to China generated more tonne miles than those from Australia in 2020, coming in at 2,711 billion tonne miles compared to Australia’s 2,627 billion.

Considering total exports from the two countries, rather than just those from China, Brazil generates much more tonne mile demand with its iron ore exports than Australia does. 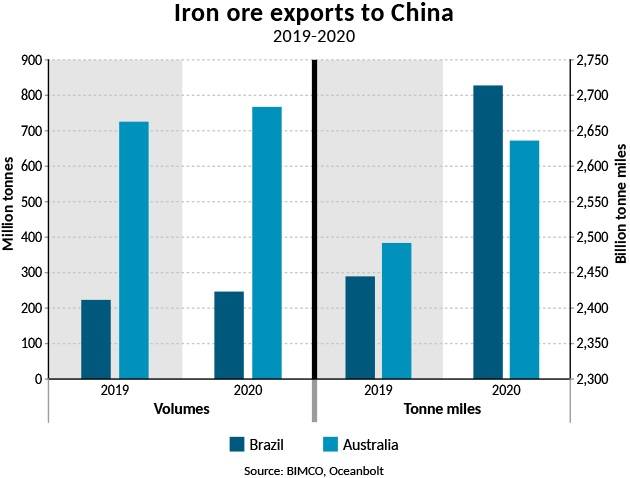 “These huge tonne mile numbers illustrate just how important Chinese iron ore imports are to the Capesize, and more widely, the dry bulk market. The recovery in Chinese industrial production, and in particular steel demand, was one of the most important factors for the dry bulk shipping market recovery in the second half of 2020. Further developments on this front will be key to watch when trying to gauge the direction of dry bulk seaborne transportation demand,” says Sand.

The recovery in steel production has been driven by government stimulus measures focused on a recovery in industrial production and exports and construction, driving demand for steel and thereby iron ore.

This growth has continued into 2021, with the first two months seeing steel production reportedly rise by 12.9% from the same period in 2020, which itself posted growth from 2019 (+3.1%). Chinese demand for steel is expected to remain robust in 2021 as steel intensive industries such as construction and manufacturing are set to continue growing.

However, in the longer term, the shipping industry cannot count on Chinese iron ore imports continuing to grow at the current pace. The Chinese steel industry is very emissions heavy, and with China’s commitments to peak carbon emissions by 2030, and reach carbon neutrality by 2060, the steel-making industry will not be able to escape changes. Already, the use of EAFs has been increasing in recent years, lowering the need for iron ore, as scrap steel replaces coal as the major ingredient.

Also in the longer term are the investments China has been making in African iron ore mines, indicating that they are not quite ready to say goodbye to large scale iron ore imports. This is especially the case with the Simandou mine in Guinea, which, once ready, looks set to become a new ‘conveyor belt’ with specially ordered ships on long term contracts. This would add tonne mile demand if it replaces Australian iron ore but harm it should Brazilian exports be the ones to fall.

“China’s path towards peak emissions and then onwards to carbon neutrality will be an interesting one to watch for dry bulk shipping, as well as for the wider industry, as this engine of growth looks for new solutions. However, it will not be an overnight process, and for this year, with a continued push on a recovery in steel heavy industries, Chinese iron ore imports are on track for another record-breaking year,” concludes Sand.