A Chinese fishing vessel that ran aground and spilled oil off Mauritius has been refloated and detained, local officials said on Thursday.

The Lurong Yuan Yu struck a reef facing Pointe-aux-Sables near Port-Louis on Sunday evening in poor weather conditions. A minor oil spill was contained, and the vessel’s crew was evacuated by helicopter without reported injuries.

Mauritian Minister for the Blue Economy, Marine Resources, Fisheries and Shipping, Sudheer Maudhoo, said, “Mauritius’ coastal waters are some of our most important natural resources, and I am pleased to confirm that the Chinese vessel Lurong Yuan Yu has been successfully refloated and is now being inspected by my team in Port Louis.”

Salvage efforts were led the Mauritian government and coast guard with support from the local fishing community as well as a specialist environmental response team from Polyeco.

Following reports of oil in the water, approximately 300 meters of oil booms had been deployed as a precautionary measure, authorities said. Once divers confirmed the spill was not from structural damage to the vessel, authorities began lightering some of the trawler’s 130 tonnes of fuel and 5 tonnes of lubricants on Monday before removing the vessel on Thursday.

“I can confirm that there was a minor spill of fuel from the vessel on Sunday which is contained and cleaned,” Maudhoo said. “As soon as it was safe to do so we removed some of the fuel and lubricants which allowed us to refloat the vessel without any further incident.”

The refloated trawler was towed to Port Louis where the vessel is being detained as Mauritius investigates the incident. The crew is currently quarantining for 14 days under Mauritius’ COVID-19 protocols and will remain in the country to assist with the ongoing investigation.

“We are currently assessing any damage to the reef and a police investigation is ongoing,” Maudhoo said.

In incident follows a recent devastating oil spill from the bulk carrier Wakashio, which ran aground, broke up and spilled 1,000 tonnes of bunker fuel atop a reef off Mauritius in July. The environmental disaster is said to be the worst to ever impact the Indian Ocean island nation. 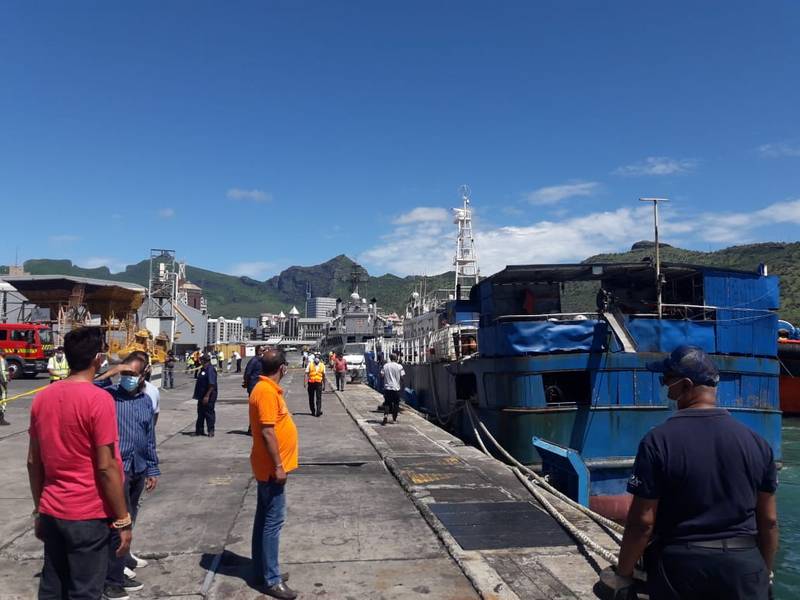