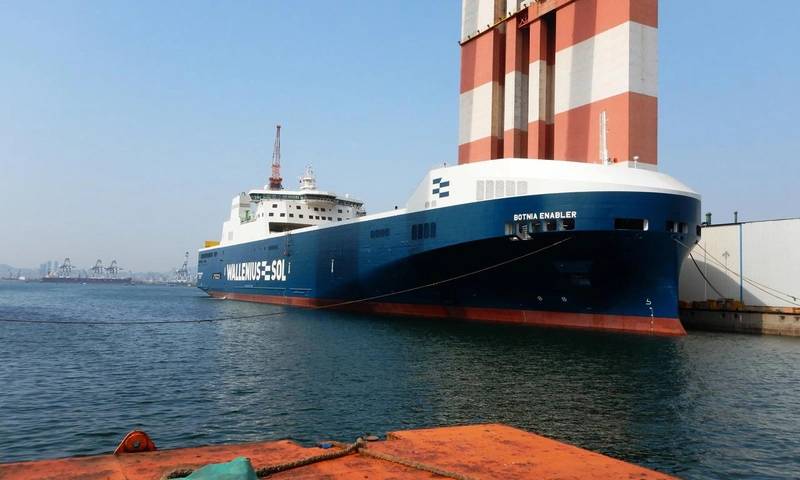 The 27,000 dwt ship has a length of 242 meters, a beam of 35.2 meters and the highest Finnish-Swedish ice class to cope with the harsh winter conditions in the Gulf of Bothnia. In addition to its classic RoRo function, Botnia Enabler also has a large capacity for containers.

“We’re incredibly pleased and proud to welcome Botnia Enabler to our fleet. The delays we suffered along the way are no secret, so finally seeing her leave port on her maiden voyage is a fantastic feeling. She’s been eagerly awaited by us and our customers,” says Ragnar Johansson, Managing Director, Wallenius Sol.

The ship will load cargo in two Chinese ports before heading to Europe and the Gulf of Bothnia. Botnia Enabler is scheduled to call at its first European port, Antwerp, at the end of June. Once the ship leaves the continent, she will enter regular traffic on her Zeebrugge-Antwerp-Kokkola-Skellefteå-Oulu-Kemi-Travemünde route. Thus the container carrying capacity on the route will increase by almost 300% from 336 TEU to 1,000 TEU compared to the ship currently serving the route, and RoRo capacity will increase by almost 100%.

“This vessel will play an important role for our customers, who need more capacity, and for us and our ability to reduce our environmental and climate impact,” Johansson said.

Equipped to run on LNG, LBG, diesel and synthetic diesel, Botnia Enabler is significantly more energy efficient per transported unit than older vessels, and according to IVL’s calculations, she will not only reduce greenhouse gas emissions by 63%, but also NOx (96%), SOx (99%) and particulates (99%).