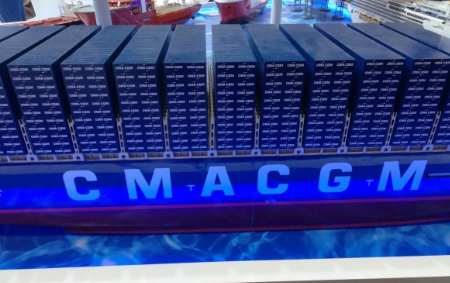 The TTIA terminal, located in the Strait of Gibraltar at the crossroads of trade between Asia, the Mediterranean, and Northern Europe, is capable of accommodating the largest containerships in the CMA CGM Group fleet.

Every year, the group operates close to 1,200 calls at ports in the Strait of Gibraltar, one of the world’s busiest commercial shipping lanes.

The TTIA terminal, a multi-user facility with an annual capacity of 1.7 million TEUs, was inaugurated in 2010 and is the first semi-automatic terminal in the Med area.

CMA CGM Group and its partners in Algeciras, HMM and DIF Capital Partners, will join forces to support and develop the terminal.

“Our investment in the TTIA terminal in Algeciras is a sign of our confidence in the region’s growth potential and reflects our desire to strengthen our service capabilities in the Strait of Gibraltar,” Christine Cabau Woehrel, CMA CGM Group Executive Vice President, Industrial Assets and Operations, said.

“This new equity position in one of the Mediterranean’s busiest ports also strengthens the CMA CGM Group’s status as a leading port terminal operator.”