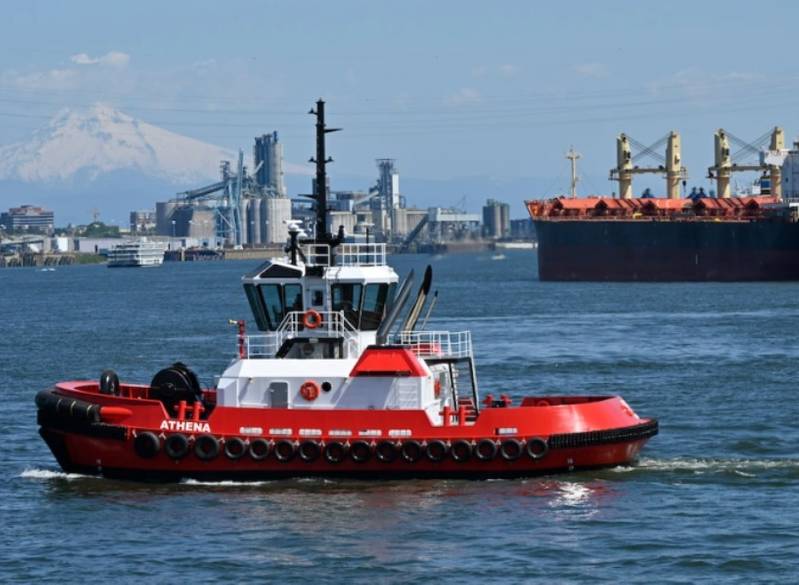 Athena meets U.S. EPA Tier IV requirements for emissions control technology. The vessel will be equipped with remote monitoring for the improved efficiency of vessel operations and data exchange to further the company’s commitment to reducing the carbon footprint of its fleet.

“Athena will provide innovation and performance for customers in the Pacific Northwest,” said Paul Manzi, vice president, Crowley Shipping. “The first two tugs produced by Diversified Marine and Brusco Tug & Barge have delivered high value and performance to our fleet. They provide a remarkable amount of power in a small footprint while reducing fuel burn and qualifying for Tier IV emissions performance rating.”

Athena follows sister ships Hercules and Apollo from builder Diversified Marine and owner Brusco Tug & Barge. The 77-foot Athena will feature almost 400 more horsepower than Apollo to deliver a bollard pull up to 96 tons, making it the most powerful tug for its size in the U.S.

“Athena is going to be a head-turner in the industry,” said Frank Manning, director of business development at Diversified Marine. “We’re proud of the incredible Hercules Class vessels our partnership with Brusco and Crowley has produced. We’ve worked closely with Crowley to incorporate operator feedback into each build while increasing horsepower on each tug. Athena will be an excellent boat, and we’re excited to see it working for a forward-thinking company like Crowley.”

Slated to operate in Puget Sound, Athena is currently under construction and is expected to be complete at the close of 2021.