Posted by tesla@jabvertising.com on March 6, 2022 | Featured 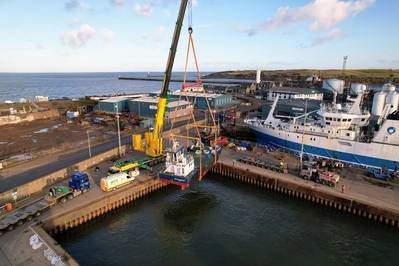 Dales Marine Services launched a new multi-cat style vessel Réalt na Farraige, a boat built to service the aquaculture sector and significant as its the first newbuild for the Aberdeen facility in more than 33 years.

Réalt na Farraige was lowered into the water for the first time on the March  5, 2022 at the Dales Marine’s facilities in Aberdeen, with quayside support services provided by Whytes Crane Hire and McIntosh Plant Hire.

The launch was made more significant considering that the last time the Dales Marine’s Aberdeen dry dock saw a new vessel build was more than 33 years ago when Hall Russell operated the dock.

The vessel’s initial sea-water launch marks the completion of over eight months’ work by the Dales team. More than 30 technicians and engineers participated n the build, a project which also involved Dales Marine’s Aberdeen-based apprentices. Gary Norrie, Project Manager, has overseen the complete project, including managing the build process and the vessel’s launch, and will oversee both the harbor and sea trials and the delivery.

“Today is a very proud moment for myself and my team here at Dales Marine. I have worked for Dales Marine for the last 14 years, and today has to be the most memorable of all those years,” said Garry Norrie, Project Manager at Dales Marine Services. “It has been a test for each and every one of us during the build over the last 8 – 9 months. From the day the first flat steel plate was brought into our workshop to the last brushstroke of paint applied, it has been a challenge and an exciting one for us all. The experience and skill utilised on this build by the team have been second to none.”

After its launch, Réalt na Farraige was moored in its final berth before it completes harbor and sea trials, following which she will sail, to the Dales Marine site in Greenock for delivery.