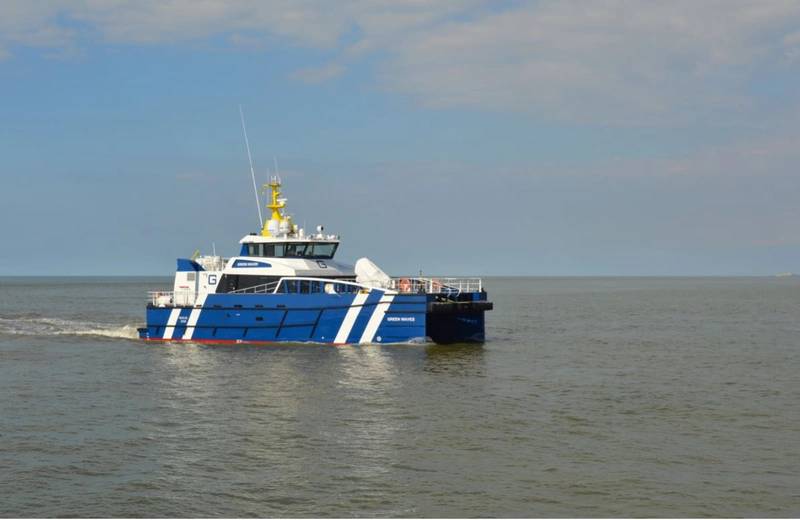 Damen Shipyards Group delivered a Fast Crew Supplier (FCS) 2710 to Rederij Groen, who has secured a contract to use the vessel to undertake crew transfers for the oil and gas industry in Germany and Denmark

The first new FCS 2710 to be delivered in the Netherlands, Green Waves was handed over to its new owner in Scheveningen less than six months after the contract signing. The speed of delivery is due to Damen’s practice of building standardized vessels in series and for stock, the hull was already under construction at Damen Shipyards Antalya, Turkey.

Damen said its FCS 2710 design is based on the FCS 2610, but with added flexibility, greater deck space, more tank capacity, increased comfort and more accommodation. According to the shipbuilder, the vessel’s 1 meter increase in height above the water enables the FCS 2710 to operate in waters with over 2 meter wave height, considerably improving comfort credentials and raising uptime.

Like its predecessor, the FCS 2710 draws upon Damen’s Sea Axe hull – here seen in Twin Axe formation – to deliver safety and comfort, even in rough seas. The Sea Axe reduces vertical slamming, enabling the vessel to glide through the waves, Damen said.

Although the vessel is just one meter longer than the FCS 2610, it is able to transport twice as many passengers – the FCS 2710 can transport 26 personnel in its standard configuration. Damen has achieved this be creating a flush desk for the FCS 2710, maximizing efficiency in space usage. In addition to the increased accommodation, this has enabled an increase in the size of the wheelhouse, whilst retaining 90 square meters for cargo transportation.

Damen sales managher Vincent de Maat said Rederij Groen will use three FCS 2610 vessels and the new FCS 2710 for its new project. “Two of the FCS 2610 vessels – Green Wind and Green Water have been refitted earlier this year at Damen Shipyards Hardinxveld in preparation for their new job,” he said.