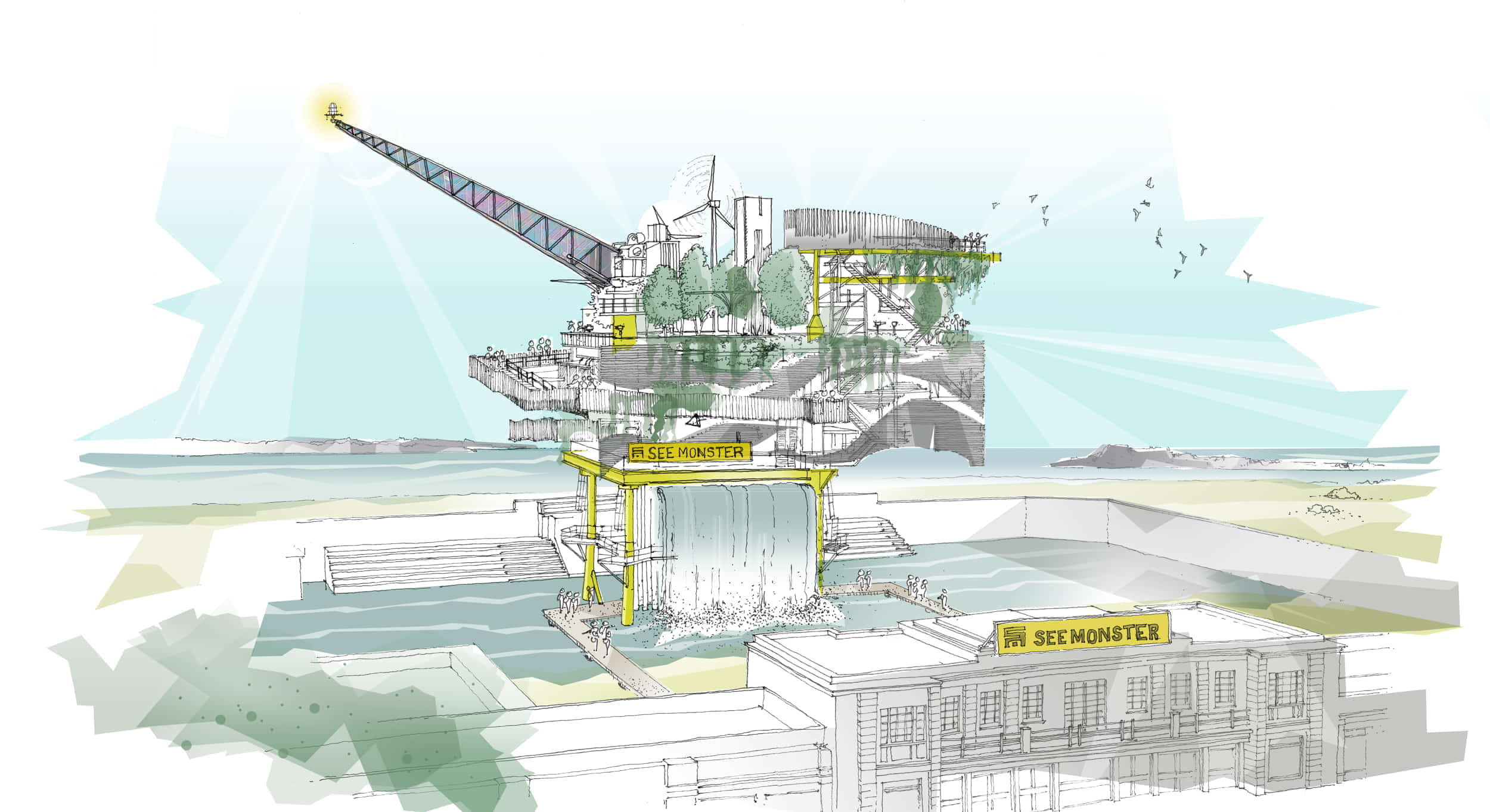 A large-scale public art installation, called SEE MONSTER, will reimagine a decommissioned North Sea platform into what is claimed to be the world’s first and only repurposed offshore platform, which will be located in Weston’s seafront Tropicana site starting next year.

The town of Weston-super-Mare was selected as one of ten locations across the country to host this flagship, national arts and culture installation, according to the North Somerset Council. SEE MONSTER aims to rehabilitate a former North Sea offshore platform and transform the retired industrial structure into a large-scale public art installation.

This is considered to be a great feat and an act of collective creativity across several spectrums such as science, technology, engineering and the arts. It is said to be the world’s first and only repurposed North Sea offshore platform as well as the largest outdoor installation ever seen in Weston.

The project is being brought to life by NEWSUBSTANCE Collective. This includes Leeds-based creative studio NEWSUBSTANCE in collaboration with Dose of Society, REDHOUSE, Rocket Women, Empowering Women with Tech, Ivan Black kinetic sculptor along with representatives from the British Antarctic Survey. The project has also won support from the North Somerset Council.

The creators behind the project intend to regenerate a decommissioned offshore platform and give it a second life on the coast of North Somerset. The large-scale installation is scheduled to be open in the summer of 2022.

Cllr Don Davies, Leader of North Somerset Council, commented: “It’s an honour to be chosen as one of the ten locations for UNBOXED and we see great opportunities for residents, businesses and visitors during the eight weeks SEE MONSTER will be with us.”

According to UNBOXED, SEE MONSTER will harness energy from the natural elements of the Great British Weather, after spending a lifetime at sea. The creation of on-board weather moments is expected to provide joyous occasions amid an overgrown garden awaiting discovery, while the Garden Lab showcases a range of new renewable technologies.

“The renewable technologies that will be showcased at SEE MONSTER support our ambitions for North Somerset to be net carbon neutral by 2030 and we are delighted to support and host this installation,” assured Davies.

The main aim of these experiments is to show how creativity and engineering can transform disused infrastructure into positive resources. This would serve to ignite conversations around inherited structures.

The repurposed offshore platform will be surrounded by broadcast space, fostering the creation and broadcast of music, radio, podcasts, talks and more. This space will be reserved to showcase local creativity and innovation, providing a platform to inspire people around the UK and around the world, based on UNBOXED‘s statement.

The structure will be installed on the site of the Tropicana, which is one of Weston-super-Mare’s much-loved iconic attractions and former 1930s lido. Standing as both a vivid reminder of the past and a symbol of the united journey towards a more sustainable future, SEE MONSTER is expected to align with the emerging cultural landscape of the town.

Drawing on the town’s unique location, the art installation will shine a light on the resilience of its coast by making new opportunities available for the retired structure’s existence. This project – UNBOXED: Creativity in the UK – is part of a celebration of creativity, taking place across England, Northern Ireland, Scotland, Wales and online from March to October 2022.

SEE MONSTER will transform the seafront into a large-scale public art installation with planted gardens and a waterfall, providing a fun and educational place to meet, while the focus will be on weather, climate change and green technologies. It will also have a dedicated outreach team with a science, technology, engineering, arts and maths (STEAM) focus.

The council announced a programme of local school visits throughout the duration of SEE MONSTER.

“It will also provide educational opportunities for our children and young people with close links to our local schools through the community outreach team,” added Davies.

This art installation is expected to attract up to 200,000 visitors over the two months it will be in Weston. The North Somerset Council confirmed the work involved in repurposing the offshore platform into art – expected to take approximately two months – will start in spring 2022, while the information regarding ticket access will be announced later this year.

Earlier this month, the repurposing of another offshore structure was announced as a major and unique project, involving the creation of an extreme park.

On 16 October, Saudi Arabia’s Public Investment Fund (PIF) revealed its plans for a tourism project inspired by offshore oil platforms, called THE RIG, which will be located in the Arabian Gulf.