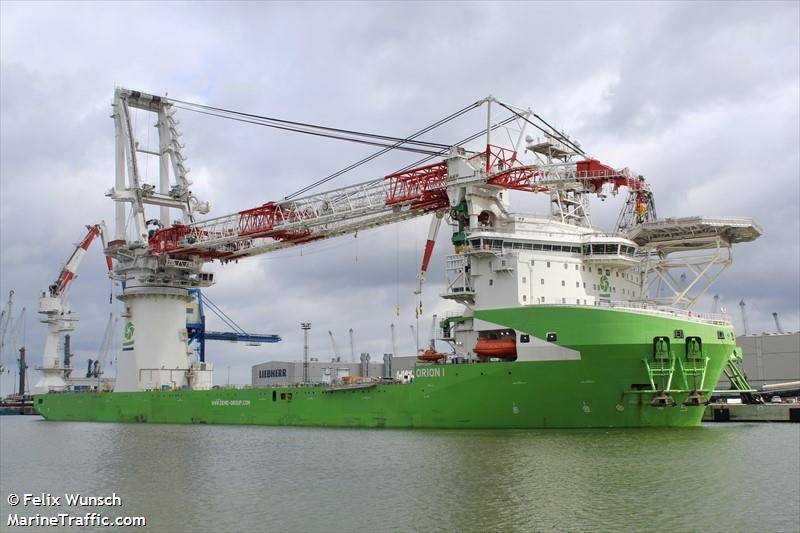 The  DP3 installation vessel Orion is equipped with a 5,000-tonne crane, built to handle the next generation of offshore wind farm components.

“Orion’ is now being prepared for its first project… and for the official naming ceremony taking place soon!,” DEME said in a social media post.

Worth noting, the Orion’s delivery is a belated one. Namely, in May 2020, an incident happened at crane maker Liebherr’s yard in Rostock, Germany, when the Orion’s giant crane collapsed onto the vessel during crane load tests, injuring several people. About two months before the accident, Deme, and Liebherr had said that the massive crane, measuring more than 145 meters, could lift nine fully loaded Airbus A380 aircraft in one go.

However, the accident then struck and made the vessel unusable for the planned Moray East offshore wind installation project in the UK, forcing DEME Offshore to deploy the replacement vessel ‘Scylla’ for the offshore jacket installation, and put off the Orion’s delivery date.

DEME has a contract in hand to deliver foundations for Parkwind’s offshore wind farm in the Baltic Sea, offshore Germany, and install them using the Orion vessel.

The 257 MW wind farm will be located northeast of the island of Rügen. It will generate enough electricity to power the equivalent of up to 290,000 households as of 2023.

Offshore installation works are due to begin in 2022 and the wind farm is expected to be fully operational in 2023.

DEME’s Orion will install the XXL monopiles fabricated by Steelwind, upon which Heerema will install 27 V174 – 9,5MW wind turbine generators supplied by Vestas.

DEME Offshore has dubbed the DP3 offshore installation vessel as “a mega monopile installation machine,” which will be equipped with a motion-compensated gripper system able to handle “enormous foundations” of up to 2,500 tonnes.

At the time of the contract announced last year, DEME said that the Arcadis Ost 1 monopiles will be the largest ever installed in Europe with a weight of around 2,000 tonnes each, and a length of 100 meters. Deme Offshore has labeled the contract ‘substantial,’ which for DEME Offshore means it has a value of EUR 150-300 million.

While it works to officially add the Orion to its jack-up fleet, DEME on Friday also said it had sold the 2010-built Thor jack-up vessel to Harren & Partner. Read more here.