Danish international shipping and logistics firm DFDS and has, with its partners, applied for EU support for the development of a ferry powered by electricity from a hydrogen fuel cell system that only emits water.

Green hydrogen is to be produced by a projected offshore wind energy-powered electrolyzer plant in Greater Copenhagen.

A group of companies has partnered up in order to develop a 100% hydrogen-powered ferry for initially DFDS’ Oslo-Frederikshavn-Copenhagen route.

The ferry will be powered by electricity from a hydrogen fuel cell system that emits only water and can produce up to 23 MW to propel the ferry.

“The largest fuel cell systems today produce only 1-5 MW, and the development of such large-scale fuel cell installations for an electric ferry is a monumental task. We can only succeed in partnership with companies that bring together some of the globe’s finest expertise in design, approval, building, financing and operation of innovative vessels,” says Torben Carlsen, CEO of DFDS.

“Together, we expect to be able to make these fuel types and technologies commercially viable, which is key to a transition of the industry to climate neutrality. This is also the ultimate goal of DFDS’ climate action plan,” says Torben.

The partnership has applied for support from the EU Innovation Fund in order to accelerate the process.

“There are no ferries of this kind in the world today and a high level of uncertainty is therefore involved in the undertaking. However, if the project develops as projected, the ferry could be in full operation on the route, or elsewhere, as early as 2027,” DFDS said.

The hydrogen will be produced locally in Greater Copenhagen based on offshore wind, and the project will investigate how to optimally integrate with the local energy system.

The ferry that has the working name Europa Seaways, is designed for 1,800 passengers and will have a capacity for 120 trucks or 380 cars. 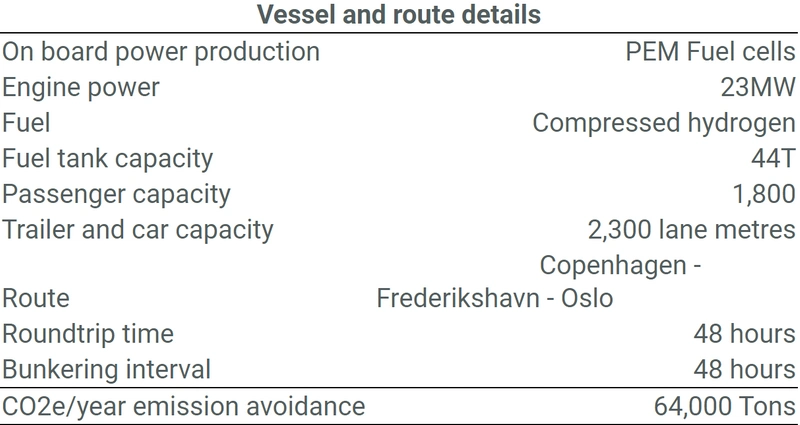