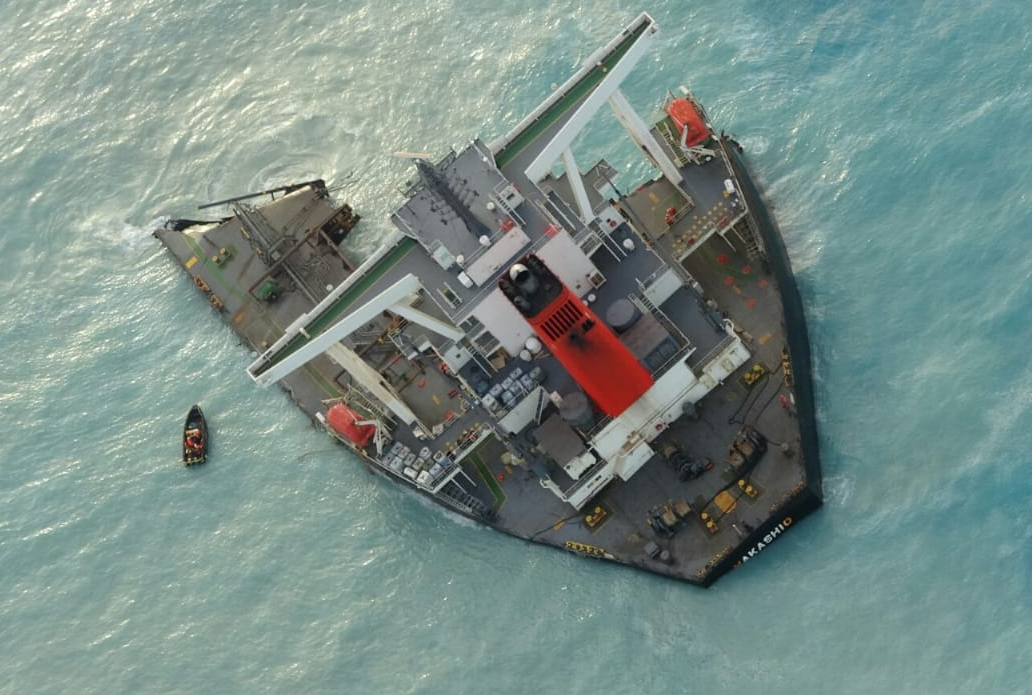 The Hong Bang 6 barge belonging to the Chinese firm Lianyungang Dali Underwater Engineering, contracted to remove the stern of the ill-fated bulker Wakashio, has arrived at the wreck site.

The Japanese Capesize bulker ran aground on a reef off Mauritius on July 25 and the vessel broke apart on August 15, 2020, causing a major fuel spill.

The arrival of the barge along with three tugs has set in motion the dismantling operation, which was officially launched on February 18th.

The work on removing the wreck from the reef is expected to last one month and depends on the weather conditions, according to Sudheer Maudhoo, Minister of Blue Economy, Marine Resources, Fisheries and Shipping of Mauritius.

The minister said that all precautions have been undertaken to safeguard the environment from pollution, including anti-pollution booms being placed in two locations near the site.

Wakashio’s bow was sent out to its final resting place on August 24 following a scuttling operation that saw the ship’s front sunk in Mauritian waters.

Even though the court proceedings into the cause of the grounding remain underway, the probable causes of the incident that lead to a massive oil spill are unsafe behaviors, Japanese shipowner MOL said in December 2020.

The bulker diverted from its navigation route approaching dangerously close to the coast of the island as the crew was reportedly trying to pick up an Internet signal.

The captain and his crew allegedly disobeyed warnings from the Coast Guard just moments before the grounding.

Based on the latest reports from the local media, court hearings from this week saw the ship’s captain and chief officer continuing to shift blame against each other for the incident.

The Captain of the MV Wakashio Sunil Kumar Nandeshwar, who apparently was not shy of navigating ships closer to shore in previous instances, apparently also admitted to drinking alcohol on board. He also accused his chief officer of neglecting to follow his orders and to stay 5 nautical miles away from the shore.

As reported, recordings from the ship’s Voyage Data Recorder (VDR) indicate that both men seemed more interested in obtaining a WiFi hotspot than in preserving the safety of the ship.