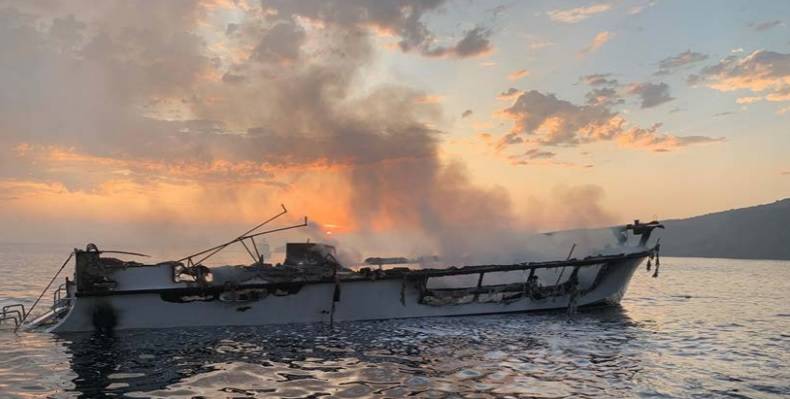 The captain of a dive boat that caught fire last year near Santa Cruz Island, resulting in 34 deaths, was indicted Tuesday by a federal grand jury on 34 counts of seaman’s manslaughter.

Jerry Nehl Boylan, of Santa Barbara, was named in the indictment by a federal grand jury that alleges Boylan, as the captain and master of the Santa Barbara-based Conception, “was responsible for the safety and security of the vessel, its crew, and its passengers.”

The indictment alleges that Boylan caused the deaths of 33 passengers and one crewmember “by his misconduct, negligence and inattention to his duties.” The indictment cites three specific safety violations: failing to have a night watch or roving patrol, which was required by the Code of Federal Regulations (CFR) and for over 20 years was a requirement in the Conception’s Certificate of Inspection issued by the United States Coast Guard; failing to conduct sufficient fire drills, which are mandated in the CFR; and failing to conduct sufficient crew training, which was also required by the CFR.

The Conception was a 75-foot, wood-and-fiberglass passenger vessel that docked in Santa Barbara Harbor. During a Labor Day weekend dive trip last year, the boat carried 33 passengers and six crew members, including Boylan. During the early morning hours of September 2, 2019, a fire broke out while the boat was anchored in Platt’s Harbor near Santa Cruz Island. The fire, which engulfed the boat and led to its sinking, resulted in the deaths of 34 people who had been sleeping below deck. Five crewmembers, including Boylan, were able to escape and survived.

“As a result of the alleged failures of Captain Boylan to follow well-established safety rules, a pleasant holiday dive trip turned into a hellish nightmare as passengers and one crew member found themselves trapped in a fiery bunkroom with no means of escape,” said United States Attorney Nick Hanna. “The loss of life that day will forever impact the families of the 34 victims. With this indictment and our commitment to vigorously prosecute the case, we seek a small measure of justice for the victims and their loved ones.”

“Nothing will ever replace the 34 lives that were lost in the Conception tragedy,” said Special Agent in Charge Kelly S. Hoyle of the Coast Guard Investigative Service – Pacific Region. “Our hearts remain with the families as the Coast Guard continues to work with our partners in the Department of Justice on this investigation.”

“This tragedy forever altered the lives of so many families and loved ones, and it deeply affected members of the public who watched in horror. We continue to grieve with them,” said Kristi K. Johnson, the Assistant Director in Charge of the FBI’s Los Angeles Field Office. “The FBI provided extensive investigative and technical resources to the joint investigation, including expert divers and evidence recovery assets. Our hope is that this indictment leads to the prevention of boating accidents and the senseless destruction of lives through proper precautions and training.”

“This was a devastating and tragic loss of 34 lives,” said Monique Villegas, the Special Agent in Charge of the ATF’s Los Angeles Field Division. “Our condolences continue to go out to all the families that have suffered from this tragedy. ATF remains committed to working closely with our partners to investigate complex fire scenes such as this by providing our technical expertise in the area of fire investigation.”

Federal prosecutors informed Boylan’s attorneys of the indictment after it was filed, and the defendant is expected to self-surrender to federal authorities in the coming weeks.

Each charge of seaman’s manslaughter carries a statutory maximum penalty of 10 years in federal prison.