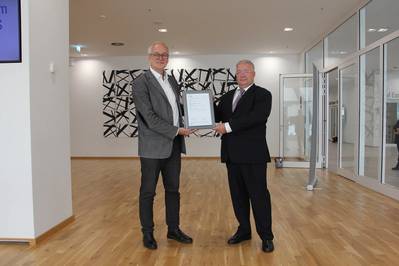 Voestalpine Böhler Welding Germany GmbH has become the first manufacturer worldwide to be awarded a Type Approval certificate from classification society DNV, for their solid wire 3Dprint AM 70/I1 feedstock. The Type Approval has been awarded based on DNV’s new class programme, DNV-CP-291 “Additive Manufacturing Feedstock”.

The Type Approval certificate was presented to voestalpine Böhler Welding Germany GmbH during the DVS Congress held in Essen, Germany, and is the first of its kind to be issued by a classification society. Feedstock is one of the most critical aspects in metal additive manufacturing (AM), as it determines component and process quality and repeatability.

“We are very pleased that voestalpine Böhler Welding Germany GmbH has chosen DNV as the preferred class partner for this challenging project,” said Torgeir Sterri, Regional Manager, West Europe at DNV Maritime. “Additive manufacturing could have a significant impact on the maritime production chain, by enabling parts printed on demand, even on-board vessels, reducing waiting times and the carbon footprint of the overall supply chain.”

“The worldwide first Type Approval for feedstock by DNV is a milestone for the qualification of additive manufactured parts for marine service. The approval closes the gap in the supply chain from feedstock to part and it shows a promising perspective how a qualification performs according to the guidelines of a ship classification society. The cooperation between the partners during the approval process was efficient and on a high level of technical understanding,” states Dr. Martin Peruzzi, CTO of voestalpine Böhler Welding.

“DNV has been investigating the opportunities and challenges posed by AM since 2016 and continue to pave the way with forward-looking industry initiatives involving key stakeholders globally,” said Ramesh Babu Govindaraj, Materials & Welding at DNV. “Our role as a classification society is to ensure that that these components are of similar or better quality to conventionally manufactured products and meet classification requirements.”

In 2017, DNV published the first guideline for the use of AM in the maritime and energy industries and in 2018 issued developed the first approval of manufacturer (AoM) scheme for additive manufacturing (AM). In 2019 DNV developed the Type Approval program for AM feedstock, for producers wishing to supply products that comply with the DNV rules and standards. The Type Approval program is designed to verify a manufacturers’ ability to deliver products to given specifications and in accordance with the requirements of the DNV rules.