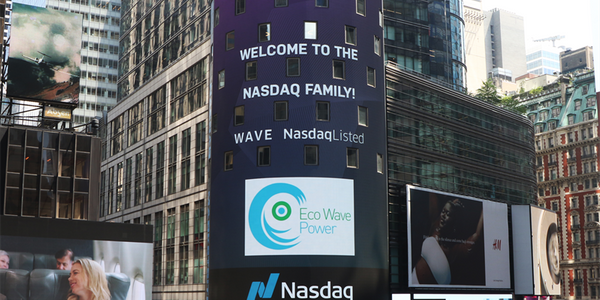 Eco Wave Power began its trading on the Nasdaq on July 1, 2021, under the symbol “WAVE.”

“Becoming a publicly-traded company on the U.S. Nasdaq marks the beginning of a  new chapter for Eco Wave Power,” said Inna Braverman, the founder and CEO of Eco Wave Power.  “We have a proven track record for more than a  decade of producing clean electricity from ocean and sea waves, with our cutting-edge patented technology. We are passionate about responding to climate change by working toward the commercial production of clean electricity from ocean and sea waves. I am incredibly proud of our talented team around the world who embodies our mission to help make the world a better place.”

According to Eco Wave Power’s press release, Robert J. Karabinchak, who serves in the New Jersey General Assembly for the 18th legislative district, will speak at the ceremony to share his vision for supporting legislation to promote wave energy in New Jersey.

“His vision is a first-of-its-kind wave energy pilot in the state. The implementation of renewable energy and wave energy in New Jersey is especially important given recent destruction due to climate change,  including the recent hurricane Ida, which devastated parts of New  Jersey,” the company said.

Eco Wave Power specializes in onshore/nearshore wave energy technology. It installs its systems in the onshore and nearshore environment and attaches them to marine structures, such as breakwaters. Read more on how its system works.