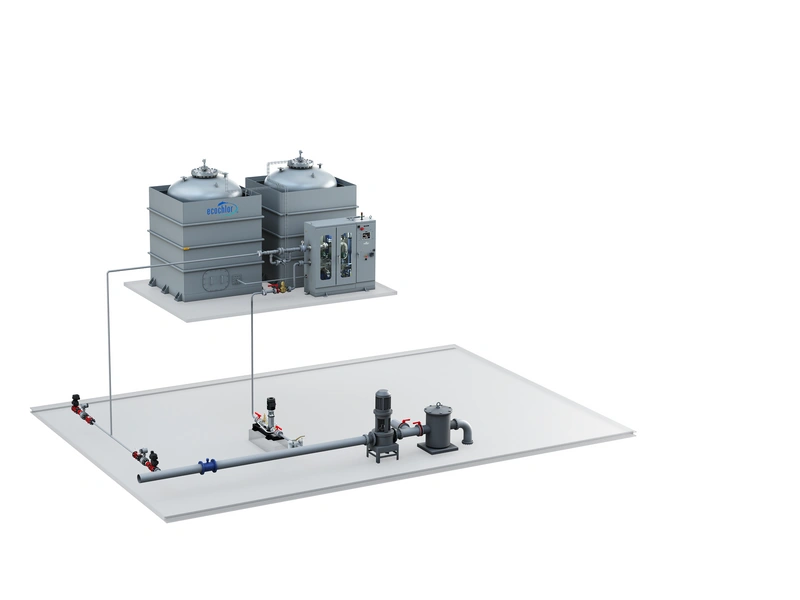 Ecochlor, Inc. announced it has wrapped up land-based and shipboard testing for its filterless EcoOne ballast water management system (BWMS) in preparation for an application for USCG and IMO BWMS Code Type Approvals.

DNV was chosen to act as the Independent Lab (IL) throughout the entire process and has been responsible for the evaluation, inspection, testing oversight and submission of the EcoOne BWMS Type Approval applications.

The land-based biological efficacy (BE) testing, was undertaken by the Golden Bear Research Center (GBRC) in California, USA. GBRC performed the tests, analyzed samples, and managed test results in the format required by the IL. Whole effluent toxicity testing was also performed successfully as part of the land-based trials.

The Shipboard testing, undertaken by DHI as sub-laboratory, was completed to evaluate the BE and related shipboard operational performance (OP) of the EcoOne BWMS on board a commercial vessel. DHI performed the shipboard tests, analyzed samples, managed test results in the format required by the IL. Due to global pandemic restrictions, shipboard testing was allowed to be performed on two commercial vessels owned by Maran Tankers, a VLCC and an Aframax, during their typical vessel voyage routes within the six-month testing period.

Steve Candito, Ecochlor CEO said, “From our first test in September 2020 to its completion in June 2021, the EcoOne system has gone through an extensive review using the most robust and stringent requirements in the maritime industry for a BWMS. Each step of the process – starting with engineering design that is simpler and requires even less maintenance than our two-step filtered BWMS – has leveraged Ecochlor’s high standards for excellence and reliability into our new product line. We are pleased to have completed these tests on our new filterless BWMS with very impressive results as confirmed by DHI and GBRC.”

The filterless EcoOne BWMS is a one-step treatment process utilizing ClO2 alone. Vessels operating this system can operate anywhere in marine and brackish waters (i.e., ≥ 1PSU) and with no restrictions on temperature or turbidity.

The EcoOne Hybrid BWMS has a dual mode of operation with both filtration & ClO2 or ClO2 alone. This system will allow shipowners to operate their BWMS either with or without a filter. This option will be suited for shipowners seeking the flexibility of unrestricted operation in freshwater globally, with the convenience of a no-filter system. Vessels that already have an Ecochlor BWMS with filters installed can upgrade to the Hybrid option with minimal cost.