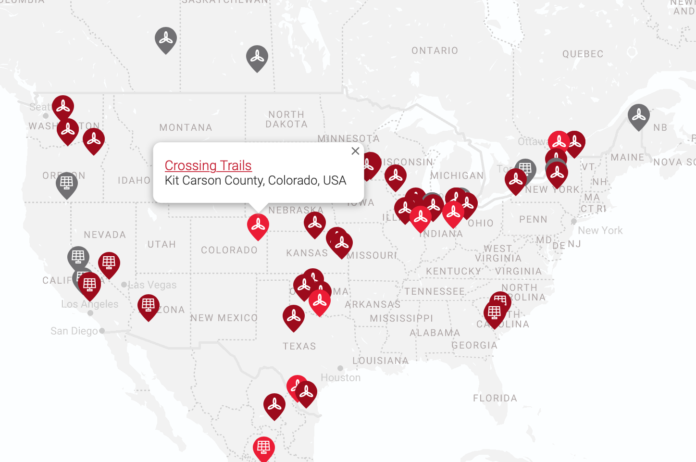 Tri-State Generation and Transmission Association, a wholesale power supply cooperative, is the project’s sole offtaker through a long-term power purchase agreement (PPA) with EDPR NA. The new wind farm is located 20 miles south of Seibert, Colo., and is within the service territory of Tri-State member K.C. Electric Association. Crossing Trails, which was developed, constructed, and is owned and operated by EDPR NA, consists of 20 Vestas V150 4.3 MW and five Vestas V136 3.6 MW wind turbines.

With blades stretching more than 240 feet, the 4.3 MW wind turbines boast increased efficiency and cost-effectiveness. Some of the various components of these wind turbines were constructed at in-state Vestas facilities and within Tri-State member cooperatives’ service territories, including Poudre Valley REA, United Power and San Isabel Electric Association.

Through the life of the project, Crossing Trails will disburse approximately $12 million to local governments, which will contribute to the enhancement of local infrastructure and services. More than $20 million will be paid throughout the project’s lifecycle to landowners who will earn a steady, drought-resistant paycheck by harvesting the wind and housing the project’s turbines – and other infrastructure – on a small portion of their land. Crossing Trails will also continue to procure goods and services through local businesses within the project community.

“EDP Renewables applauds Tri-State for investing in renewable energy to deliver cleaner, more affordable electricity to their members,” says Miguel Prado, CEO of EDPR NA. “With the completion of Crossing Trails Wind Farm, EDPR NA adds Colorado as the 17th U.S. state where we operate a renewable energy project. We’re grateful for the opportunity to expand our presence in the U.S. and look forward to delivering economic and environmental benefits for decades to come.”

More than 100 workers, many of whom are local to the project area and Colorado, helped construct the project. Crossing Trails also employs six full-time team members who will operate and maintain the wind farm.