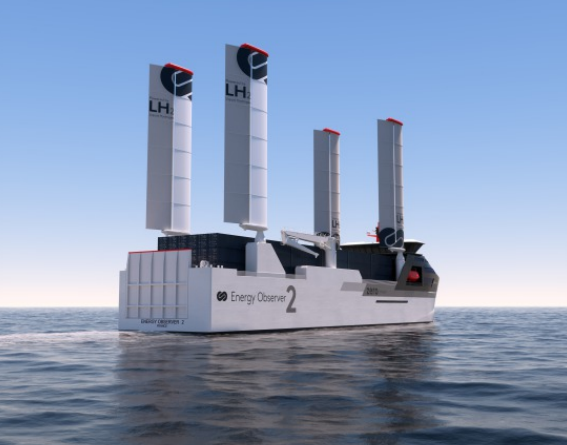 The Ship It Zero coalition welcomed a new zero-emission cargo ship design unveiled by Energy Observer and called on big retailers to use this moment to move their business to ocean shipping carriers that can offer zero-emission shipping solutions.

The innovative ship concept was presented at the One Ocean Summit in Brest, France.

For over a year, an unprecedented number of fossil-fueled cargo ships have been clogging U.S. ports, dumping egregious levels of asthma and cancer-causing air pollutants into nearby port neighborhoods. Meanwhile, this announcement continues to prove that the technology to solve this problem is within grasp.

The coalition is pushing big retailers such as Target, Walmart, Amazon, and IKEA to work with international shipping companies to take immediate action to abandon fossil-fueled ships and lead the way to a healthy, climate-friendly business model by committing to ship products on zero-emissions ships this decade.

“Today’s (10 February) Energy Observer 2 announcement shows that the technology for zero-emission cargo shipping is available, so it’s time retailers ask: what else are shipping companies possibly doing with their unprecedented pandemic profits in the decade of climate emergency if not aggressively reducing their pollution and buying new zero emission ships?”

“It’s inspiring to see more and more zero-emissions cargo ships being built and prove that this massive technical revolution is finally here. But if international shipping truly wants to address its enormous pollution problem and have a fighting chance to meet global climate goals this decade, it’s all hands on deck for ports, retailers, and cargo carriers to work together,” Kendra Ulrich, Shipping Campaigns Director, Stand.earth, said.

“Major retailers like Walmart, Target, Amazon, and IKEA must demand immediate emissions reductions and the rapid implementation of true zero-emissions technologies from the cargo shipping companies they work with.”

“While it’s promising that a major carrier like CMA-CGM is involved in assessing the commercial viability of these recent efforts, it cannot be overlooked that they also have massive investments in false climate solutions like LNG-powered ships, which will only worsen the climate crisis,” Ulrich added.

Led by environmental advocacy groups Pacific Environment and Stand.earth, the Ship It Zero campaign is calling on some of the nation’s largest maritime importers — including Amazon, Target, IKEA, and Walmart — to transition to 100% zero-emissions cargo shipping vessels by 2030.

This goal will ensure the shipping industry does its fair share in helping to keep global warming under 1.5 degrees Celsius, the target scientists say is needed to avoid the worst consequences of the climate crisis.