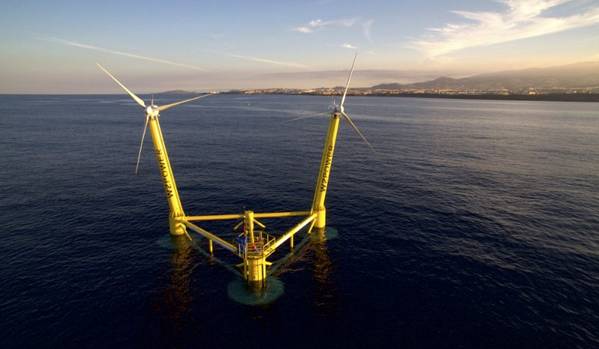 The deal is structured as a long-term partnership focused on the deployment of the W2Power technology as a lead contender for floating wind power developments worldwide, Eni said.

“With two wind turbines mounted on the frame of the same floater, which always face the prevailing wind, W2Power yields one of the highest power-to-weight ratios and the lowest levelized cost of energy of any floating wind power technology. This innovative solution integrates patented features and key proprietary technology elements and has successfully completed testing at open sea at prototype level in Spanish waters, being the first multi-turbine solution in the world to reach this level of maturity,” Plenitude said of EnerOcean’s floater.

Plenitude will contribute capital and expertise to the EnerOcean development program and will initially retain a 25% equity share in EnerOcean S.L., which will continue to operate independently.

“Floating solutions are widely seen as an effective way to spread the success of offshore wind to most countries across the world, including most of Southern Europe, where the coastline is characterized by deep waters,” Plenitude, which has been described as benefit company and the outpost of Eni’s decarbonization strategy, explained.

Stefano Goberti, CEO of Plenitude, commented: “Investing in innovative technological solutions is crucial for Plenitude to support Eni’s energy transition process and to reach the long-term targets of 15 GW renewable installed capacity by 2030. This agreement testifies Plenitude’s willingness to put its world-leading skills and offshore engineering resources into unlocking the potential of floating wind power worldwide, which is key to delivering the much needed massive build-out of offshore wind for decarbonization, supply security and sustainability. We will continue to cooperate with EnerOcean and other technology providers to help accelerate the commercialization of floating offshore wind.”

Pedro Mayorga, CEO of EnerOcean, commented: “We were impressed by the excellence of Plenitude’s experts who conducted the in-depth Technology Validation of W2Power over several months. Plenitude and its affiliates showed a deep awareness of all core aspects of the technology, and its scrutiny of our work over more than 10 years was meticulous but fair. EnerOcean is delighted to have access to Plenitude’s vast expertise and its shareholder Eni. Through the support of Plenitude and Eni, I am confident that we will succeed in carrying out our ambitious targets.”