Cambozola is the primary prospect located in the PL1049/PL1049B/PL1049C licenses in the Northern North Sea, in an area with significant existing infrastructure and just c. 30 km northwest of Longboat’s Kveikje discovery, announced on April 5, 2022, Longboat Energy said.

“Cambozola is a play opener and one of the largest gas prospects to be drilled in Norway in 2022. In particular, the turbidite sand lobes of Lower Cretaceous age stand out as amplitude anomalies on seismic data. Gross unrisked mean prospective resources for the entire Cambozola prospect have been estimated at 159 mmboe1. In the event of a successful discovery on Cambozola, there will be follow-up prospectivity on the licenses,” Longboat Energy said.

The drilling of the Cambozola well 34/9-1S is being carried out using Odfjell Drilling’s Deepsea Stavanger semi-submersible drilling rig. Drilling is expected to take up to 14 weeks to drill.

Helge Hammer, Chief Executive of Longboat, said: “Following on from our success on Kveikje announced last week, I am pleased that we have now commenced drilling operations on the sixth exploration well in our drilling program. 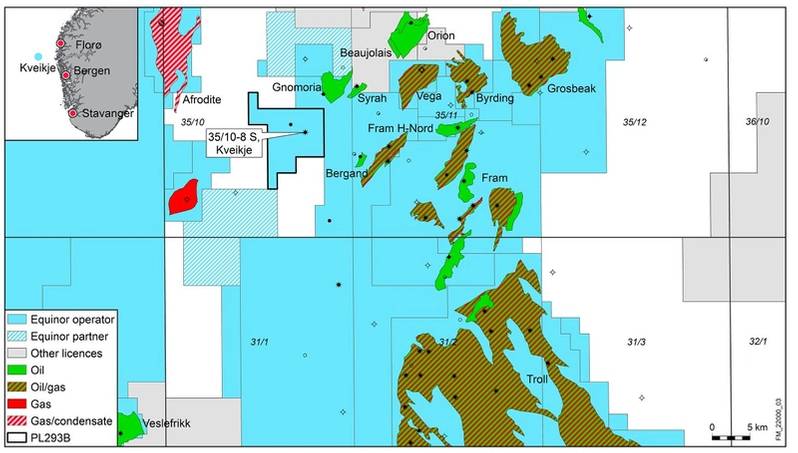 Kveikje – Credit: EquinorAfter Longboat last week said that its partner Equinor had made a significant oil and gas discovery at the Kveikje well offshore Norway, the confirmation came from Equinor on Monday.

Temporarily called Kveikje, this is the sixth discovery in this area since the autumn of 2019. Up to more than 300 million barrels of oil equivalent were proven in the five former discoveries.

“We are very pleased to make another discovery in this area that we regard to be commercial. As we did with the other discoveries in this area, we will consider tying this discovery to the Troll B or C platform. By utilizing the existing infrastructure, we will be able to recover these volumes at a low cost and with low emissions,” says Lill H. Brusdal, Equinor’s vice president for the Troll area.

There were several drilling targets in the exploration well. After Kveikje was discovered, drilling continued to the next target in the upper part of the Cretaceous stratigraphic sequence. Smaller deposits of petroleum were discovered that are considered as non-commercial. The well has been permanently plugged and abandoned.