Seadrill’s creditors are now the proud owners of 24 offshore rigs. The most important question for them: what are they worth? Esgian’s Hans Jacob Bassoe writes.

Earlier this year, Seadrill filed for chapter 11 for the second time since 2017 and on Monday it announced that more than 88% of the secured lenders accepted the reorganization plan.

At the end of October, Seadrill’s plan will be delivered to the court and, if confirmed, it could exit chapter 11 about 60 days later.

After this exercise, Seadrill’s liabilities will be slashed by over $4,9 billion. This massive equitization of debt means shareholders will see their holding in the restructured entity drop to 0.25%.

So, what did creditors really get in exchange for their clemency?

Asset values are key to any restructuring process. And for drilling rig contractors the value of the company lies in the rigs.

Seadrill’s investment banker and financial advisor Houlihan Lokey Capital valued the company’s total assets at $1,795 – 2,396 billion. Their valuation of Seadrill’s consolidated assets only is $1,711 – 2,312 billion. Houlihan stated that these figures are derived from a DCF and comparable company analysis. 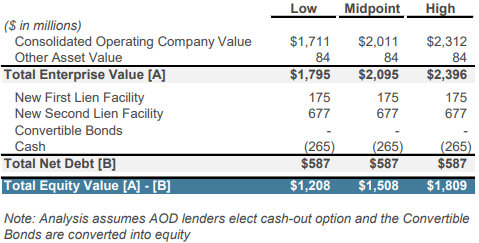 [Esgian assumes] that most of the company’s value is in the 24 wholly-owned assets plus the five 50% owned Seamex jackups. For simplicity and illustrative purposes, [Esgian excludes] everything else as it’s assumed to have an immaterial effect on the total enterprise value.

Esgian Rig Values estimates that the 24 rigs plus 50% of the five Seamex jackups have a value of $1,94 – 2,134 billion. These values are based on charter-free assets on a willing buyer, willing seller basis.

[Esgian] considers the estimated value given by Seadrill to be in line with Esgian’s asset values.

Since Seadrill exited chapter 11 back in 2018, Esgian Rig Values shows that the company’s fleet value has fallen nearly 60% from around $4,6 billion.

Even after this restructuring, Seadrill faces risk from a wide range of factors.

But [Esgian sees] values for newer, working, and well-maintained rigs stabilizing at current levels and likely to increase over the next one to two years. [Esgian bases its] assumptions on higher oil prices and stronger demand for offshore drilling.

Hans Jacob Bassoe is an offshore rig market analyst within Esgian and has experience as a shipbroker in the maritime industry and has also held positions in both the shipping and offshore sectors.

The article above was originally published on Esgian’s website.