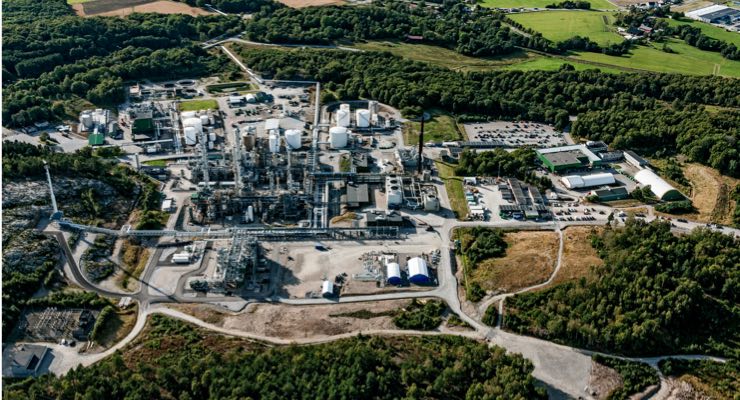 Perstorp is planning large-scale production of sustainable methanol from captured carbon dioxide and other residue streams.

This could contribute substantially towards a climate-neutral industry.

Project AIR, which Perstorp created with partners, was approved for the next level of evaluation from the EU Innovation Fund, one of the world’s largest funding programs for the demonstration of innovative low-carbon technologies.

“The positive response from EU Innovation Fund means that we are one step closer to finalizing our ambition to become Finite Material Neutral,” Perstorp’s President and CEO Jan Secher said. “Project AIR is a concrete example of the transition towards a circular economy and of how significant CO2 emission reductions could be achieved by utilizing existing resources and closing loops.”

Project AIR is a unique large-scale project that by 2025 will decrease annual carbon emissions into the atmosphere by half a million tons.

This will be accomplished by building the world’s largest Carbon Capture and Utilization Unit on Perstorp’s site in Stenungsund, Sweden.

Using a new electrolysis plant and taking biogas as a source, it will produce 200,000 tons of sustainable methanol per year, enabling the supply of sustainable chemical products to a large variety of sectors and end products.

Perstorp, together with partners Fortum and Uniper, applied for support for Project AIR from the EU Innovation Fund.

In an initial evaluation from the Fund, Project AIR received the highest possible score on the categories GHG Avoidance and Degree of Innovation, obtaining in total 14 out of 15 possible points. Project AIR has thereby been chosen to be further evaluated for funding.

“In addition, it also uses the recycled carbon sources together with captured CO2 for methanol circular production,” it said. “Furthermore, the proposed plant will use wastewater instead of municipal water as a feedstock in the electrolysis station. Wastewater is not used as a feedstock in any other commercial electrolyzers. The proposal represents breakthrough innovation.

“Moreover, the integration processes, manufacturing, control and operations of the project have not been demonstrated elsewhere; this is a first of a kind and is a breakthrough. This is excellent,” the EU Innovation Fund added.