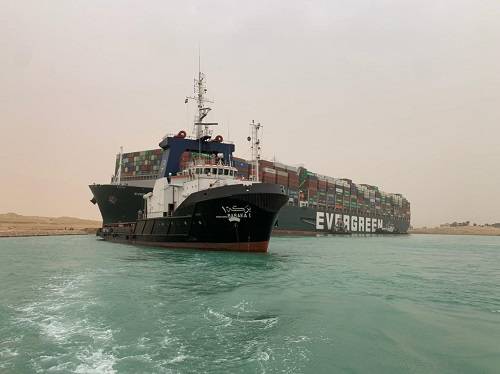 Dozens of ships carrying everything from oil to consumer goods have been delayed by the grounding of a vessel in the Suez Canal, and companies may have to reroute cargoes around Africa if the blockage extends beyond 24 hours, shipping sources said.

Efforts were underway on Wednesday to refloat the 400-meter, 224,000-tonne Ever Given, which got stranded on Tuesday morning after losing the ability to steer amid high winds and a dust storm.

Shipping sources say the grounding has disrupted regular voyages through the Canal, which is one of the world’s critical chokepoints and the quickest sea route between Asia and Europe.

Kpler said more than 20 oil tankers carrying crude and refined products were affected by the disruptions.

Any delays can have a knock-on effect for both LNG and European gas prices.

There were also more than 13 containerships anchored around Suez with at least two others waiting in the Mediterranean, Refinitiv ship tracking data showed.

The world’s biggest container line A.P. Moller Maersk said seven of its vessels had been affected so far, adding that “four of them are stuck in the canal system while the rest are waiting to enter the passage”.

Shipping sources said if the delays extend ships could potentially start rerouting around Africa, which takes a week longer to navigate, if they were unable to sail through the Canal.

“The next 24 hours will be critical in determining the longer-term impact,” said Chris Evans, international supply chain specialist with professional services company Colliers.

“If there is a significant delay, then it is likely that the Cape of Good Hope will serve as an alternative route to keep things moving.”

Disruptions caused by the coronavirus and a surge in demand for retail goods by consumers have led to wider logistical bottlenecks around the world for container lines and supplies in recent months.

“With the Asia-Europe supply chain already stretched to the limit, the Suez Canal blockage comes at a particularly unhelpful time,” said Greg Knowler with IHS Markit’s Journal of Commerce.

“Container shipping lines have deployed every available vessel to serve heavy demand from European and U.K. importers, with congestion delaying the handling of inbound cargo.”