Australian oil and gas company FAR said Friday it would sell its stake in offshore blocks in Senegal to Woodside, subject to the approval of its shareholders, as proposed company takeover offers made by Remus and Lukoil were incomplete.

To remind, FAR had last year agreed to sell its Senegal interests, containing the Sangomar development, to India’s ONGC Videsh. However, Woodside as FAR’s partner in the project exercised its first-buy rights to acquire FAR’s interest.

FAR has a 13.67% interest in the Sangomar exploitation area and a 15% interest in the remaining RSSD evaluation area. The company in January executed a Sale and Purchase Agreement with Woodside in relation to the sale, which was due to be put up for approval at the shareholders’ meeting at the time planned to be held on February 18, 2021.

In the meantime, FAR had a non-binding A$209.6 million ($159.15 mln) all-cash takeover proposal from private investment firm Remus Horizons PCC Ltd on the table, which was conditional on the Woodside sale not occurring.

On February 17, a day ahead of the proposed shareholders’ meeting set to approve the Woodside deal, Russian oil company Lukoil also launched a conditional non-binding indicative proposal to acquire 100% of the shares of FAR at A2.2c cash per share. The Lukoil proposal values FAR at A$220 million [$170,4 million], Far said at the time.

Per FAR, Lukoil said at the time that that the price proposed by it represented a higher value for FAR shareholders than both the proposed sale of the RSSD project to Woodside and “the incomplete proposal” from Remus Horizons PCC Limited. 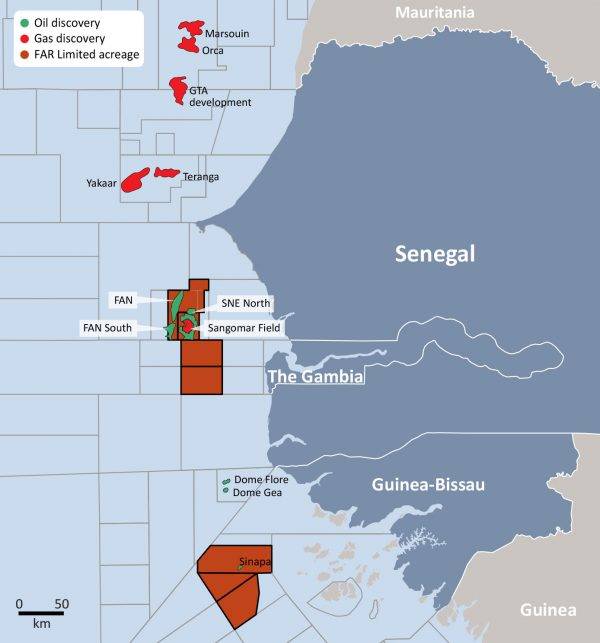 Lukoil said it had a deep understanding of the RSSD Project as it has previously completed due diligence and entered into an agreement to acquire an interest in the RSSD Project from Cairn Energy which was subsequently pre-empted by Woodside.

FAR, which is in default with respect to its January 2021 cash call of US$19.9 million for its part of the Sangomar development costs and has until mid-July 2021 to remedy defaults or risk losing its interest in the RSSD Project, then postponed the shareholders meeting “to clarify the status of the Lukoil Proposal.”

Come Friday, March 12, FAR seems to have made up its mind – it will sell to Woodside as the Remus and Lukoil proposals remained “incomplete at this point in time.”

“FAR will provide further information to shareholders prior to the shareholders meeting being held, and shareholders who have already voted will have the opportunity to change their vote if they wish. FAR has no intention of further postponing the shareholders’ meeting, noting that FAR intends to proceed with the Woodside Sale if shareholders provide their approval,” the company said.

The terms of Woodside’s acquisition will reflect those of the FAR/ONGC Transaction, including payment to FAR of US$45 million, reimbursement of FAR’s share of working capital, including any cash calls, from January 1, 2020, to completion, and entitlement to certain contingent payments capped at US$55 million.

The Woodside-operated Sangomar field development was sanctioned in early 2020. The field will be developed using an FPSO to be delivered by MODEC. The FPSO will be deployed approximately 100 kilometers south of Dakar, Senegal, and will be Senegal’s first offshore oil development.

The FPSO is scheduled for delivery to support the production of the first oil in 2023 and will be moored in approximately 780 meters water depth. The recoverable hydrocarbon reserves of the Sangomar field total approximately 500 million boe.