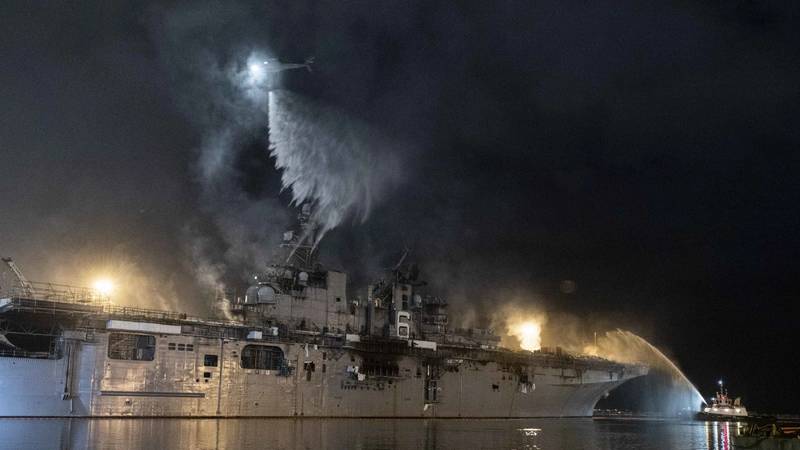 The U.S. Navy announced it will scrap the USS Bonhomme Richard (LHD 6), forgoing repairs to the Wasp-class amphibious assault ship that was ravaged by a major fire in San Diego in July.

“We did not come to this decision lightly,” said Secretary of the Navy Kenneth J. Braithwaite. “Following an extensive material assessment in which various courses of action were considered and evaluated, we came to the conclusion that it is not fiscally responsible to restore her.

“Although it saddens me that it is not cost effective to bring her back, I know this ship’s legacy will continue to live on through the brave men and women who fought so hard to save her, as well as the Sailors and Marines who served aboard her during her 22-year history,” Braithwaite said.

Fire broke out aboard the 844-foot-long warship on July 12 while the ship was docked for routine maintenance at its home port. Over the course of four days, the blaze spread from a lower cargo hold upward throughout much of the ship and into the tower and other structures aboard the vessel, causing significant damage.

After the fire was put out on July 16, Rear Adm. Philip Sobeck, Commander of U.S. Navy Expeditionary Strike Group 3, said it was too early to make any predictions regarding the ship’s future and that a full investigation would be required to determine the vessel’s fate. “The ship can be repaired. Whether or not it will be repaired will be determined,” he said. “We cannot make any conclusions until the investigation is complete.”

The Navy said Tuesday that it concluded work to restore Bonhomme Richard could require between five and seven years to complete and run upwards of $3 billion.

Plans to potentially rebuild the ship for alternate purposes were also examined, but the Navy found the cost could exceed $1 billion, which is as much or more than a new-construction hospital ship, submarine tender or command-and-control ship, it said.

With plans to repair or repurpose the vessel now off the table, the Navy will now remove Bonhomme Richard’s systems and components for use in other ships while the timeline for towing and dismantlement are being finalized and investigations associated with the fire are ongoing.

Since July, the Navy has made moves to bolster its fire safety and prevention efforts across its fleet and shore installations, including the establishment of a Fire Safety Assessment Program to assess ships’ compliance with Navy fire-safety regulations, with a priority on vessels undergoing maintenance availabilities.

“Naval Sea Systems Command issued an advisory to all supervising authorities on directed fire prevention requirements and outlined corrective actions to improve fire protection, damage control and firefighting doctrine, all of which will be executed in close partnerships with industry partners,” the Navy said.