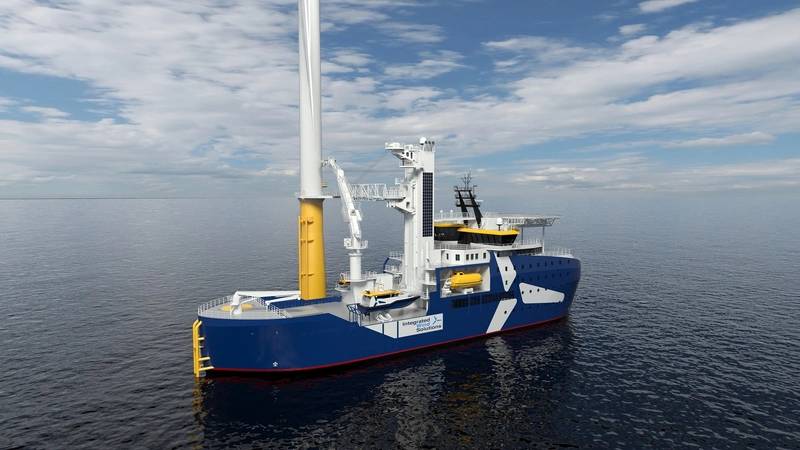 A steel cutting ceremony for IWS Windwalker was held Monday—10 days ahead of the initial project plan—at China Merchants Heavy Industry facility in Jiangsu, China, following the ceremony for IWS Skywalker at the same yard on January 14.

“We are very pleased to achieve this important milestone for our second vessel in the Skywalker class which will be ready for operations mid-2023. IWS Windwalker will follow its sister vessel IWS Skywalker and take the industry to new heights as it pushes the boundaries of operability, environmental impact and efficiency,” said Christopher A. Heidenreich, COO of the Integrated Wind Solutions ASA.

IWS Windwalker is the second vessel in the IWS Fleet’s Skywalker class of hybrid powered walk-to-work vessels, designed by Kongsberg Maritime to support commissioning works during the construction of wind farms, as well as supporting operations and maintenance during the lifetime of offshore wind farms, bottom fixed and floating. Each will be fitted with the latest generation fully compensated gangway and crane from MacGregor.

According to IWS, the vessels boast several “industry firsts”, including the largest battery pack with solar panels for additional charging, as well as a hull and propulsion system design that increases operability and reduces emissions. Their energy consumption estimated to be 20% lower than other CSOVs currently under construction.

The vessels are also said to be industry’s first to have the “DNV SILENT” notation, which focuses on minimizing the impact on marine life below water.

Norwegian Ministry of Climate and Environment (ENOVA) has granted EUR 1 million per vessel to support the environmental initiatives on IWS Skywalker and IWS Windwalker. The vessels advanced technology will reduce annual emissions by more than 1,300t CO2 equivalents per vessel, IWS said.

IWS Windwalker is currently uncommitted, and the company is evaluating several potential opportunities.

Upon delivery in summer 2023, IWS Skywalker will directly commence its first contract at the Dogger Bank Wind Farm owned by SSE, Equinor and ENI.