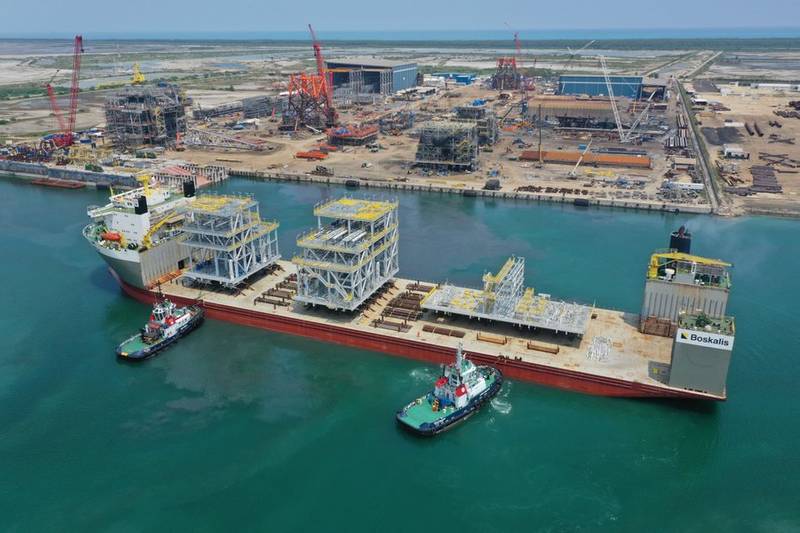 The first batch of topside modules has been shipped for a floating production storage and offloading (FPSO) unit for Japan’s MODEC, U.S.-based engineering and construction firm McDermott International said on Wednesday.

The FPSO, named Miamte MV34, will be used on the Amoca and Mizton fields located in the Eni-operated Area 1 block, in the Campeche Bay approximately 10 kilometers off the coast of Mexico, in approximately 32 meters water depth. First oil is planned in 2021.

McDermott’s Altamira fabrication facility in Mexico is producing five FPSO topside modules for the project to be delivered in two shipments. This first includes modules that will provide compression, vapor recovery and a laydown area for the FPSO.

Although the FPSO is being assembled at Asian yards and the Bomesc Offshore Engineering yard in Tianjin is building most of the topside modules, some of the topsides were constructed in Mexico to help fulfill a 25% local content requirement.

In the third quarter of 2019 MODEC took an 8 billion yen ($74 million) provision for loss on the construction contract. Modec said the EPCI project has incurred approximately 11 billion yen added cost that “reflects unavoidable revision of the construction execution plan due to extension of construction period of a subcontractor in Mexico mainly because of the tight labor market in the country.”

COSCO is performing the FPSO conversion, and Keppel will fabricate, complete and integrate the topsides modules and mooring support structure.

Eni is operator and holds 65% interest in Area 1, which contains several finds, including Amoca, Tecoalli and Mizton. Qatar Petroleum has the remaining 35% stake.

Initial production phase began in 2019 using a wellhead platform on the Mizton field with 8,000 b/d production capability. In addition to the FPSO, two additional platforms will be installed on the Amoca field and one on the Tecoalli field.